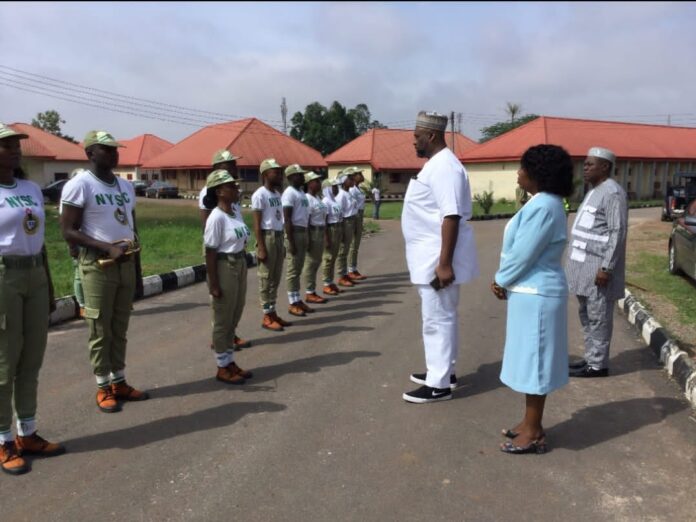 Gov. Godwin Obaseki of Edo state has tasked outgoing corps members in the state on the establishment of small enterprises.
Obaseki gave the admonition on Thursday at Imaguero Secondary school, Benin; at the passing out ceremony of the 2021 Batch ‘A’ stream II, corps members deployed to the state.

Represented by Hon. Chris Nehikhare, State Commissioner for Youth and Humanitarian Affairs, Obaseki, said that establishing small scale business would not only make them self employed, but also employers of labour.

He noted that his administration places high premium on youth development and abhors youths restiveness, adding that, that was why the state government had put adequate measures in place to ensure that the welfare of corps members was given due attention.

“Gentlemen corps members the labour market is saturated globally. It is because of this scourge, the NYSC management has consistently energized the skill acquisition and entrepreneurship development training to groom Nigerian youth into finished labour champions.

“My administration has always maintained a course of action that guarantees short and long term credit facilities to young entrepreneur with viable ideas to translate to meaningful endeavours.

“I therefore implore you to utilize the various forms of experience garnered during the service year and opportunities available to establish small scale enterprises, which will not only make you self employed but also employers of labour”, he said.

He also advised the outgoing corps members to be disciplined and desist from act or vices that would bring shame.
“Be steadfast to the teachings and ideals of the NYSC. Do not allow anybody to use you to settle political, religious or tribal differences to your own detriment”.

The governor also noted the corps members’ contributions to the socio economic development of the state, particularly in areas of healthcare, agriculture, social services, rural infrastructure and education.
According to him, these contributions would forever be cherished by the government and people of the state and country at large.

Obaseki commended the outgoing corps members’ contributions at putting in place numerous community based projects, as well as corps employers of labour for their partnership.

Earlier, Mrs. Abiodun Olubukola, Edo State coordinator of NYSC, disclosed that 1,237 corps members were passing out, adding that five of the corps members distinguished themselves during the service year.

She added that generally the corps members exhibited high sense of discipline, dedication, resilience, and patriotism.

She commended the governor for his unparalleled support to the NYSC scheme in the state over the years, especially his avowed commitment towards the completion of the NYSC permanent orientation camp in Okada.

Highlights of the ceremony included the presentation of certificate of recognition for outstanding performance to two of the outgoing corps members by the Edo Government as well as the march past and inspection of guard of honour.