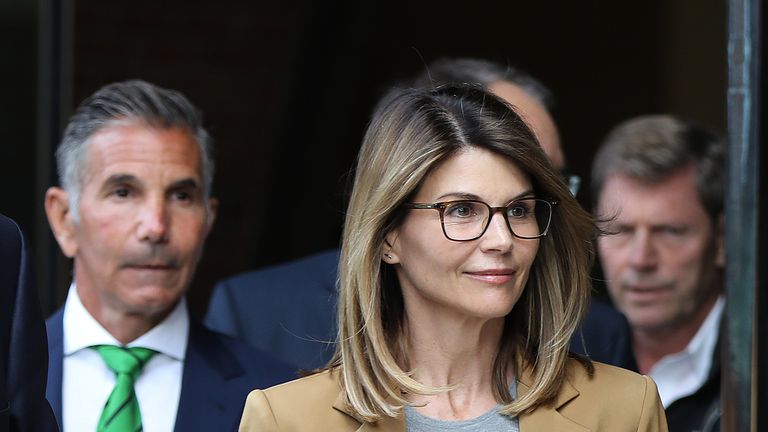 In what Department of Justice prosecutors are calling the biggest admissions scam in U.S. history, at least 50 people allegedly bribed coaches and paid for forged standardized tests in a conspiracy to get their children admitted to elite American colleges.

Details: To date, 50 people — from business leaders to celebrities like Lori Loughlin and Felicity Huffman and athletic coaches — have been charged in the alleged scheme, dubbed Operation Varsity Blues.Show less

March 12: Federal prosecutors in Boston charge at least 50 people connected to the scheme.

March 19: USC says students who may be connected to the scheme will be prohibited from registering for classes or acquiring transcripts while the institution continues its investigation.

March 28: Rudy Meredith, Yale’s former women’s soccer coach, is the third person to plead guilty to taking nearly $900,000 bribes in exchange for recruiting students as athletes no matter their abilities, along with 2 charges of wire fraud. He could face up to 20 years in prison.

March 29: 15 people made initial appearances in federal court, including TPG exec Bill McGlashan and Michelle Janavs, a former executive at the company that developed Hot Pockets.

April 4: Harvard launched an official probe into its fencing coach, per the WSJ. It came hours after a Boston Globe exposé.

April 8: Federal prosecutors said Huffman, 12 other parents and the former head coach of men’s tennis at the University of Texas at Austin have agreed to plead guilty. Prosecutors will seek a prison sentence between 4 and 10 months for Huffman.

April 9: “Full House” actress Loughlin and her fashion designer husband Mossimo Giannulli were originally arrested on one count of conspiracy to commit mail and wire fraud charge. On Tuesday, the couple — along with 14 other parents — was indicted with conspiring to commit fraud and money laundering.

April 12: Mark Riddell, 36, who was paid $10,000 to take college entrance exams on behalf of students, according to Buzzfeed News, pleads guilty to charges of mail fraud and money laundering. His sentencing is expected for July 18, meanwhile, he is indefinitely suspended from his full-time job as Director of College Entrance Exam Preparation at IMG Academy, a boarding school in Florida.

April 15: Loughlin and husband Giannulli plead not guilty to charges of mail fraud and money laundering conspiracy, the AP reports. They have not spoken publicly regarding the case.

April 18: Loughlin’s eldest daughter Isabella Giannulli received a letter of intent from federal prosecutors in early April, and may be subject to a criminal investigation.

April 22: Loughlin, her husband Giannulli and more than a dozen other defendants asked to review prosecutors’ evidence before they file any “substantive motions” in the case, per CNN

April 23: Prosecutors said Laura Janke, a former University of Southern California assistant women’s soccer coach, will enter a guilty plea by May 30 to one count of racketeering conspiracy. She has also agreed to cooperate with federal prosecutors in the case.