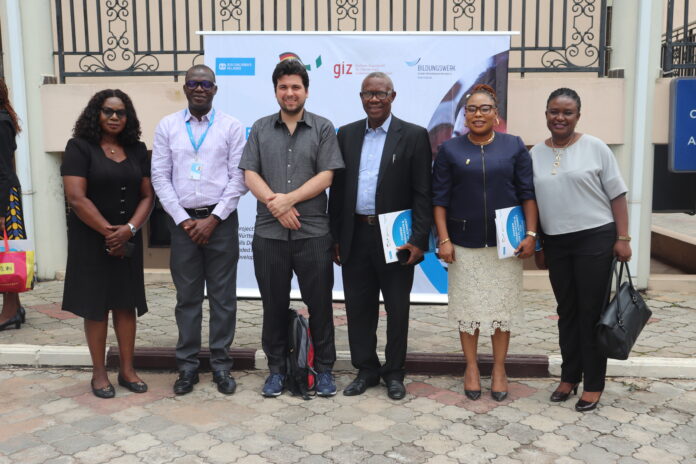 EDSG to collaborate in Career Orientation and Job placement for Edo Youths.

The Commissioner for Youth and Humanitarian Affairs, Hon. Chris Nehikhare has assured that the Obaseki-led administration will collaborate with SOS Children‘s Village and its partners in creating an enabling environment for Career Orientation and Job placements for the youths in the State.

Hon. Nehikhare gave this admonition during a Career Orientation and Job Placement programme organized by SOS Children’s Village in collaboration with the German Ministry for Economic Cooperation and Development, The BIWE International and the German Cooperation for International Cooperation (GIZ) in HomeVille Plus Hotel, GRA, Benin City.

The Commissioner who was represented by an a staff of the Ministry, Mrs. Joy Izegaegbe, said that Edo State Government will continue to collaborate with the organization to ensure that every meaningful project targeted in the State achieves its aims and objectives.

The Commissioner commended the Organization for its commitment and dedication to the care and support of families, vulnerable children and youths, expressing delight to be part of the official kick-off of the Skills Development for Youth Employment (SKYE).

He further encouraged the organization to enhance economic growth through job creation via adequate training for vulnerable youths, pointing out that their various initiatives provided hope for the hopeless and reinforced the need to empower the weak and disadvantaged in our society.

Hon. Nehikhare described the initiatives as laudable, as they have gone a long way in reducing crime, civil disobedience, and financial impoverishment of these categories of people, adding that the organization had shown support towards the obaseki led administration by adding relevance and value to the lives of Edo indigenes.

Earlier, the Edo Program Manager for SOS Children’s Village, Mrs. Kemi Ezeamyin commended the Governor and his administration for their support towards the organization since its inception in 2019, while expressing readiness for a continued collaboration with the State Government in the execution of more projects for the benefit of the people.

In addition, the Regional Manager for SOS Children’s Village, Mr Ayodeji Adelapo described the Organization as one which has the employment and empowerment of youths as its key objective, adding that the organization is designed to help in career orientation, vocational guidance and adequate placement in their areas of qualification in the field of sales.

The occasion was graced by the Deputy Governor of the State, Rt. Hon. Comr. Philip Shaibu who was represented by his Chief Press Secretary, Mr. Musa Ebomhiana.