Home News With the 2019 Race Wide Open, Where are Buhari’s Opponents? 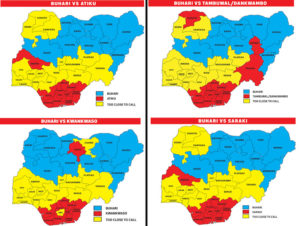 Other than its barrage of press statements and attempts at propaganda calling out the Buhari administration and the All Progressives Congress (APC) over their missteps, the Peoples Democratic Party (PDP), since its December convention that threw up a new leadership for the party, has been eerily quiet. With just nine months to go before the 2019 election, no clear picture has emerged as to who the party will field as its presidential candidate. The uncertainty in the camp of the PDP has given President Muhammadu Buhari, the incumbent and presumptive candidate of the APC, a clear edge, enabling him to sprint away from the starting blocks while the PDP looks on in utter helplessness.

The air of uncertainty pervading the PDP stems from obvious reasons: Unlike the APC in 2014 which was almost decided on who would fly the flag of the party in the 2015 presidential election, the PDP has a divided field of candidates, some of whom are still not even in its camp. While the likes of former Vice-President Atiku Abubakar and Sule Lamido, former Jigawa governor, have made their intentions known to vie for the presidential ticket of the PDP, the likes of Senate President Bukola Saraki, Governor Aminu Tambuwal of Sokoto State and Senator Rabiu Kwankwaso, are yet to decide on whether to dump the ruling APC and pitch their tents with the PDP, or to remain with the APC. The indecision, naturally, stems from the horse-trading taking place behind the scenes and what guarantees they can secure from the PDP before taking the giant step of leaving the APC.

Governor Ibrahim Dankwambo of Gombe State, on the other hand, remains mute on a presidential run as he weighs his options and tests the waters in the hope that he can emerge the “anointed candidate” without as much as lifting a finger. After all, it happened in 2007, when former President Olusegun Obasanjo ignored a large field of PDP presidential hopefuls seeking to succeed him and handpicked the late Umaru Muhammad Yar’Adua and Goodluck Jonathan as presidential candidate and running mate of the then ruling PDP, respectively.

Given Buhari’s early start in the 2019 presidential contest, he remains the candidate to beat. His cult-like following among the masses of the core Northern states, particularly in the large population centres of Kano, Katsina, Kaduna, Gombe, Bauchi, Borno, Yobe, Zamfara, Sokoto and Jigawa, remains intact and has grown from the numbers he mustered in the 2003, 2007, 2011 and 2015 elections to unprecedented proportions. In particular, the agriculture policies pursued by the administration has seen the emergence of thousands of small-hold famers in the North that have been empowered through the Anchor Borrowers’ Scheme of the Central Bank of Nigeria, and owe their new found affluence to Buhari. These along with his APC loyalists/governors in the South-west controlled states of Ogun, Oyo, Ondo, Osun and to some extent Lagos, make him the favourite in a field of hopefuls yet to secure the ticket of their part(ies).

The incumbency factor is another factor that puts Buhari in good stead to win the presidential contest in 2019. The federal government’s move, in particular, to enforce the anti-money laundering laws among banks and the morbid fear of the anti-graft agencies breathing down their necks will render it more difficult for the opposition to move funds through banking channels to execute its campaign in 2019. By starving the opposition of funds, this will give Buhari’s team the advantage it needs to deploy the war chest that it already has at its disposal to sway the electorate, especially in the swing North-central states where the president’s popularity has waned.

Add to this the penchant by Buhari’s men to use the apparatus of state to muscle the opposition through scare tactics, propaganda and even outright harassment. Examples abound of the attempts to cut Saraki to size by harassing him and his foot soldiers such as Ike Ekweremadu, Dino Melaye, Isah Misau and Peter Nwaoboshi, among others in the Senate, while looking the other way when the likes of Ovie Omo-Agege mastermind the theft of the mace. Judges in the judiciary have also been brow beaten by the administration into giving ex parte rulings and making judicial pronouncements on cases meant to emasculate the opposition, while the security and anti-graft agencies have been turned into the rabid henchmen of the government who have their sights set squarely on elements in the PDP, but ignore the misdemeanour allegations against members of the APC.

Should former Governor Adams Oshiomhole of Edo State also emerge as the national chairman of the APC, this could bolster the president’s chances at the polls next year. Unlike the mild-mannered Chief John Odigie-Oyegun, Oshiomhole will prove to be a veritable tool in the 2019 campaign season as a mobiliser, enforcer and attack dog against the opposition PDP. It is no wonder Buhari has whole-heartedly thrown his weight behind Oshiomhole as the next chairman of the APC. The snag is that Oshiomhole’s emergence may not go down well with some vested interests in the APC who may see Oshiomhole as a spoiler in their 2023 ambitions.

A divided opposition would also make the path to 2019 much easier for Buhari in the months ahead. As it stands, a major contender has not emerged in the PDP as the candidate likely to take on the president next year. Besides, should the likes of Saraki, Kwankwaso and Tambuwal elect to pitch their tents with other parties other than the PDP, this would make it more difficult to split the votes in large population centres like Lagos and Kano where the electorate may decide to stick with the devil they know than the one that they hardly know.

Notwithstanding Buhari’s strengths, he still has several weaknesses that could lead to his undoing. Even the APC has admitted that the 2019 elections will be no smooth sail and if care is not taken, the party could see power snatched from its grasp next year. For one, the electorate is unimpressed with his handling of the economy since he assumed office three years ago. Unemployment under the president has reached new records and poverty, despite the so-called Social Investment Programme of the administration, has remained widespread. Indeed, even the president’s loyalists in the North have been known to complain that life has been more harrowing under Buhari than it was under his predecessor, Goodluck Jonathan.

His inability to effectively contain the Boko Haram insurgency in the North-east and killer herdsmen in the Middle Belt has also seen him lose the support of the swing states in the North-central region. Buhari, in 2015, was finally able to get the North-central zone to vote for him, but with the wave of killings in Benue, Taraba, Nasarawa, Kogi and Plateau States, and his seeming nonchalance to the bloodletting, there is a very high likelihood that a majority of the voters in these states will pitch their tents with the opposition. What is worse is the new breed of widows, orphans and displaced persons who have lost their homes and farmsteads to herders that place a higher premium on their livestock than on human lives.