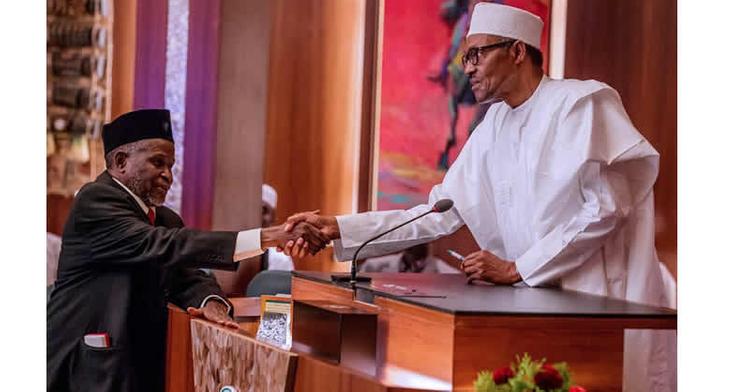 The Presidential Candidate Atiku Abubakar and the Peoples Democratic Party PDP, have rejected the appointment of acting Chief Justice of Nigeria.

The PDP issuing a statement by its National Publicity Secretary, Mr Kola Ologbondiyan, on Friday in Abuja, said that the PDP rejected in its entirety, the attempts to foist an illegal Chief Justice on the nation while the substantive CJN, Justice Walter Onnoghen, remains in office.

President Muhammadu Buhari on Friday suspended Onnoghen, pending the completion of his trial at the Code of Conduct Tribunal and sworn in Justice Ibrahim Tanko Mohammed, from Bauchi State, as the acting CJN.

According to the president, the suspension was as a result of the ongoing trial of Onnoghen by the CCT and subsequent order of the tribunal directing him to suspend him, pending the completion of his trial.

Ologbondiyan who is also the Director, Media and Publicity, PDP Presidential Campaign Organization said that the PDP firmly held that such impunity could not stand, as Nigeria is a nation governed by law.

He called on the National Assembly to immediately reconvene and proceed with legislative actions against  President Buhari over the suspension.

“There can be no two Chief Justices of Nigeria. Our constitution is clear on how a Chief Justice is appointed and removed,  as such does not lie on the prerogative of the President.

“As such, we urge all Nigerians and the international community to recognize only Onnoghen as the Chief Justice of Nigeria.

Ologbondiyan invited the international community and particularly the United States and the United Kingdom to note that the action was an assault on the judiciary geared towards subverting the 2019 general elections.

“Nigeria is a democratic state governed by the constitution and the law and Nigerians will never allow anybody to appropriate rulership to himself outside the dictates of the law,” Ologbondiyan said.

Similarly, Atiku Abubakar rejected the appointment of an acting CJN and call on Justice Onnoghen and the judiciary to resist with every legal and constitutional means that they could muster.

Abubakar in a statement described the President’s action as the latest in the ongoing rape of the nation’s hard earned democracy .

“The fact that the unlawful suspension of Onnoghen was announced just as it became public knowledge that the CJN was constituting the election petition tribunals is not lost on discerning Nigerians and the international community.

“This act of desperation is geared towards affecting the outcome of the 2019 Presidential elections.

“Indeed, it is not just the CJN that has been “suspended”, it is the Nigerian Constitution that has been infracted and, in effect, suspended, under the guise of the suspension of the CJN.

“The judiciary is the last hope of the common man and the defender of our democracy,” the statement stated.

He also urged Nigerian electorate to save the country from dictatorship by voting against desperate war against the judiciary.

In another reaction, Senate President Bukola Saraki, expressed concern over the suspension of  Onnoghen.

Saraki, in a statement, said that the suspension was alien to the Constitution.

“There is already a general belief that this action was taken to pre-empt the already scheduled inauguration of election petition tribunals by Onnoghen.

“By unilaterally suspending the CJN without following the provision of the constitution is a dangerous signal to the entire world.

“Our Constitution makes no provision for suspension of the nation’s highest judicial officer. The constitution provides a clear process for removal of the CJN and specifies the roles of the three arms of government, beginning from the National Judicial Council, the National Assembly and the Presidency.

“They all have different roles to play in that process, ” he said.

He called for the reversal of the decision to allow due process of law to take its natural course in determining the guilt or otherwise and suitability of Onnoghen to continue as the head of the nation’s judiciary.