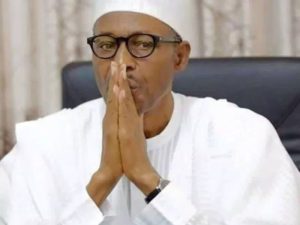 We join the very good and peace loving people of our state to welcome our President, Gen Mohammadu Buhari, GCFR, as you begin a two day working visit to the historic ancient City of Benin.

We are aware that whilst you are here, amongst other things, you are to commission the Accident and Emergency Ward of the Central Hospital, the Edo University Iyamho, the newly renamed Sam Ogbemudia College as well as Upper Siluko Road.

As they say, Edo people would want Mr. President to use one stone to kill two birds. We plead with you Mr. President to kindly take a walk across the road after you may have commissioned the Edo University in Iyamho to take a tour of Governor Oshiomhole’s Country Home which is just across the road. Our outgoing governor and your host, Governor Adams Oshiomhole, started the building of this Mobutu Seseseko style estate in 2011, a fews months after he started the building of the Accident and Emergency Ward construction in the Central Hospital Complex in Benin City. It will interest Mr. President to know that it’s the same contractor that handled both projects. While his Estate has since been commissioned and even hosted a state wedding, the hospital ward has not even treated a malaria patient. What you are commissioning today is a ward in a hospital that no body knows the contract value.

We are sure that judging from your pedigree of an austere living, you should be able to give a good report of what the inside of the fairytale Oshiomhole mansion looks like. Mr. President may as well impress on him to invite the Nigerian press on a guided tour to debunk the grandiosity that led to corruption allegations that have been leveled against your host.

And before you cut the tape to commission the university, Edo people have also appealed to you Mr. President to kindly tell the outgoing governor to come out clean on the true owners of the university that has taken over N40billion of borrowed funds from the state treasury.

For your information Mr. President, it will amaze you to know that your host, outgoing governor Oshiomhole has refused to disclosed to Edo people, the cost for the construction of the Accident and Emergency wing of the Central Hospital which he has invited you to commission as well. In the spirit of Mr. President’s fight against corruption and enforcement of due process, we plead with you to demand the disclosure of the contract sum. Your host will boastfully tell you of the type of equipment ordered for the hospital, and say most have come and just a few are been awaited. We advice you to be wary, Adams Oshiomhole lies. For this commissioning, he has borrowed equipment from Stella Obasanjo hospital to deceive you and Edo people. He has diverted funds appropriated for the equipping of this hospital and we dare say that this building will not be in a condition to treat or receive patients before 2019.

Mr. President, our outgoing governor’s new palatial home that he built on government land is located at Okoro Otun Street, next door to government house. We will suggest, Mr. President that you add this and the Iyamho mansion among the projects to commission for Edo people because they are all part of our Commonwealth!

Finally Mr. President, our people wish you a happy stay and we urge you to please take an unguided tour of Benin City to see the ruinous impact of the failed Benin City Water Storm Project.

We wish you safe trip back to Abuja, Mr. President!