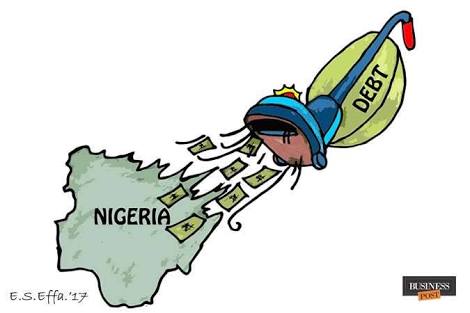 Nigeria’s public debt rose by 4.5 percent to N22.7 trillion in the first quarter of 2018 (Q1’18) due to increased domestic borrowing by state governments and increased foreign borrowing by the federal government.

This is coming along with quantum 173 percent jump in the nation’s debt servicing cost to N724 billion during the quarter.

Disclosing these yesterday, the Debt Management Office (DMO) explained: “The increase was accounted for largely by the increase in the Domestic Debts of States and the Federal Capital Territory (FCT), as well as, the $2.5 billion Eurobond issued in February 2018 whose proceeds were still being deployed to redeem maturing Domestic Debt.”

Giving the positive side of the development, however, DMO said, “The debt figures show that the implementation of the debt management strategy which entails an increase in the External Debt Stock through new external borrowings and the substitution of high cost domestic debt with low cost external debt, is achieving the desired results in several areas amongst which are:

“While the redemption of NTBs made more funds available to banks for lending to the private sector, the decline in Interest Rates implies lower cost of borrowing for the private sector. Thus, the government is actively enabling the private sector through the instrumentality of financial markets, to play a leading role in economy.”