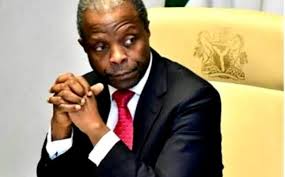 The Federal Government will soon roll out a new soft loan scheme aimed at funding micro businesses in the country.

Vice President, Prof. Yemi Osinbajo, who disclosed this at the launching of the Micro, Small and Medium-Scale Enterprise (MSME) Clinic, in Benin, said the scheme will kick off in a couple of weeks.

He added that the scheme to be called Trader Moni is meant to help very small scale traders fund their businesses. Naira Osinbajo noted that apart from the existing Government Enterprise and Empowerment Programme (GEEP) MarketMoni scheme, which targets market women, traders, artisans and enterprising youths, the TraderMoni is a micro-credit scheme to cater for ultra-micro enterprises.

He stated: “The policy of the Federal Government is to support businesses, not just big business but particularly small, medium-sized businesses and micro businesses. The whole idea is that we want to ensure that we give whatever support whether it is cash, advice or even registration to all of our small and medium enterprises. “In the next few weeks, we are starting a micro-credit scheme which we call Trader Moni. It is a different scheme from MarketMoni.

The TraderMoni is for the smaller traders, those who are doing small, little things, where in many cases, their inventory isn’t more than N5000 – N10,000. We want to give those types of people some credit as well, and once they pay back, we will give them some more money as well. “We want to make sure that the very poor trader, no matter how poor you are, so long as you are trading or working, the Federal Government will support you by giving you some extra money to do whatever you are doing. So that every Nigerian who wants to work, who wants to do something, can get the opportunity to do some work. If you are not benefitting from GEEP, our micro credit loans scheme, you can benefit from this new micro-credit scheme we are about to start.”

Meanwhile, under the existing GEEP MarketMoni scheme, 350,000 loans have so far been disbursed nationwide, according to Toyin Adeniji, Executive Director of Financial Inclusion, Bank of Industry (BoI). “Beneficiaries of the GEEP loan have been able to improve their businesses. Some of them from a one-man shop now employ six people; those who buy things in small units now buy in bulk. It is a very aggressive scheme and we have a target to reach over a million. As at now we have disbursed loans to over 350,000 beneficiaries nationwide,” she stated.