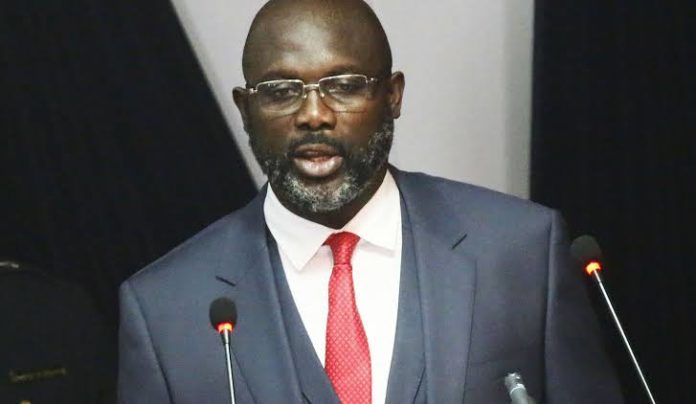 This discussion is principally about Liberia and her embattled president, Mr. George Weah (alias, King George), but let’s first draw from recent historical occurrences in other African countries to broaden our perspective and boost our lesson.

By 1990, Fredrick Chiluba had reaped immense popularity and goodwill from his trade union activities through the Zambia Congress of Trade Unions (ZCTU) whose chairman he was for many years. ZCTU was the major umbrella labour union in Zambia with thirty-five different unions affiliated to it.

Apart from leading a tireless battle for the welfare of workers which earned him several arrests and detentions, Chiluba was for many years at the forefront of campaigns to end Zambia’s one-party system. From October 24, 1964, when Zambia gained independence from Britain, she was ruled by Dr. Kenneth Kaunda and his party, United National Independence Party (UNIP).

Mr. Chiluba became the leader of the Movement for Multiparty Democracy (MMD) and in Zambia’s first multiparty election which took place on October 31, 1991, the Chiluba-led MMD defeated Kaunda’s UNIP and Chiluba was sworn in as Zambia’s second president since independence amidst wild, widespread celebrations, thus ending the 25-year rule of UNIP.

The BBC magazine, “Focus On Africa” of January-March 1992 put him on its cover with the caption, “Small Man – Big Victory”!After Chiluba’s first term of five years, he contested and won a second term. But his attempt to amend his country’s constitution to get a third term in office received no support from the parliament despite the overwhelming majority his party enjoyed there. Immediately he left office, his successor, Mr. Levy Mwanawasa, whom he had campaigned vigorously for, ordered his trial for massive corruption.

He continued to face trial despite his failing health. The government announced in May 2008, that it had recovered “nearly $60 million in money and assets allegedly stolen during Chiluba’s presidency.” Earlier on May 4, 2007, in a civil case instituted against him in the United Kingdom, Judge Peter Smith found him guilty of embezzling some $46m (£23m) of public funds.

A columnist with The Post, one of Zambia’s independent newspapers, Roy Clarke, dismissed Chiluba as “a vain, cross-dressing, high-heel wearing, adulterous, dwarf thief.”In 2008, President Mwanawasa who had insisted that Chiluba’s corruption trial must run its full course took ill and died.

He was replaced by Mr. Michael Sata. On August 17, 2009, Judge Jones Chinyama of a Lusaka Magistrate Court, discharged and acquitted Chiluba of all the corruption charges. Yet the smell of corruption never left his name despite this acquittal. It continued to linger even after Chiluba’s death at the age of 68 on June 18, 2011.

It was not surprising, therefore, when on December 29, 2016, following a Supreme Court judgment obtained by Zambia’s Anti-Corruption Commission, Chiluba’s properties worth 40 million Zambian Kwacha ($3,103,020.00) which had earlier been confiscated by the commission in 2002, was forfeited to the state, ending a protracted legal battle that outlived the former president and put a permanent dent on his name.What this shows is that most of the time, success or popularity earned in other fields of endeavour before one assumed public office does not always translate to success and transparency in political leadership.

Sometimes such popularity might be the product of careful image management and propaganda, which mask the person’s incompetence, lack of focus and even callousness. The real tragedy is when the people naively allow themselves to be stampeded by the uproarious propaganda to close their ears to all voices of caution and all attempts to show them very clear evidences of the candidate’s lack of capacity and even sincerity of purpose.

But soon, they would realise that they have been duped by unscrupulous propagandists and the reality of the leader’s directionlessness would hit them in its stark reality. And regret and sorrow would then constitute their daily menu, until, perhaps, the nightmare is over.

Assuming, for instance, that President Muhammadu Buhari did not win the 2015 elections, there is no doubt that he would have been going about today with the superior air of the “most qualified and duly equipped” presidential material that was denied the opportunity to “save Nigeria.” But today, virtually every messianic myth built about Buhari and successfully sold to Nigerians in 2015 has exploded on virtually everybody’s face and left despair and pain everywhere.

Only a gaggle of ghoulish denialists and hired megaphones are still out there throwing about their self-serving and thoroughly nauseating propaganda which has lost every capacity to entice. Now, a similar, massive disappointment and deep regret are what Liberians are feeding on each time they remember that only a year and half ago, they had trooped out en masse to cast their votes for one of their nation’s soccer ambassadors, the football hero, Mr. George Weah, who in 2018 was sworn in as the country’s 25th president.

Last month, a group of dissatisfied citizens under the aegis of Council of Patriots (COP) organised what they called a “Save the State” protest during which they gave President George Weah one month to meet their demands or they would unfold their next line of action which would have dire consequences on his political career.

An independent newspaper, “FrontPageAfrica”, described the protest march as “the largest gathering of protesters since the end of Liberia’s brutal civil war.” The COP complained that several of their members have been arrested and detained since President Weah commenced his repressive actions against the media and voices of dissent. The group said in a statement: “Currently, about twenty peaceful and law-abiding youth and students are being held at the central prison in detention.

We call on the government of Liberia to release those peaceful citizens that have been abducted by the state. We also noticed the use of foreign security forces on the day of protest wearing state security uniforms.” While dedicating the new Duport Road General Market in Paynesville on June 6, Weah issued a very stern warning to those he described as “constantly threatening the state, constantly inciting people.” “I want to be clear, we will not tolerate those kinds of citizens … Those that (are) constantly insulting the President, I want to be clear; after this (that is, the June 7 protest march), there will be no citizens in this country, I can defy you, that will ever insult the President and think you will walk on the streets freely…If you have your views, express your views but any insult and any threats, that citizen will be dealt with under the law. And it can be whosoever,” the president fumed.

No doubt, George Weah is overwhelmed. When he announced his presidential run, reservations were expressed by informed analysts about his preparedness for the office. They pointed at his lack of experience and inadequate education, but the generality of the masses who had been deluded to think that he would replicate the magic his feet performed in the soccer field in the governance of Liberia paid no heed. They overwhelmingly gave him their votes. But now, just halfway into his tenure, the myth seems to have brutally exploded, and it has become very clear that the emperor actually is unclad.

According to the June edition of New African magazine, Weah’s “government has been accused of corruption, political ineptitude, and being clueless as to how to rescue an economy that is in freefall. Under Weah’s stewardship, opposition politician Wilmot Paye says, poverty and unemployment are rising, while high-level corruption has become even more entrenched. Paye, chairman of the opposition Unity Party, says Liberians have become ‘spectators in their own economy’ and ‘bystanders in the affairs of their country’”.

Instead of fighting to recover the economy and the people’s confidence, Weah is fighting the media and opposing voices. He specifically accused Jonathan Paye-Layleh, a BBC reporter of being against his regime. Paye-Layleh had to flee the country. The corpse of another journalist, Tyron Brown, was found outside his residence, and some fingers are pointing at the government.

Mr. Weah’s regime is trying hard to frustrate the media by refusing to pay thousands of dollars of advertisement money, thus crippling the ability of many of the media outfits to pay their staff and continue in their very essential work of holding government accountable.In saner climes, Mr. Weah would have since realised that the game is over and quit the field, but in his part of the world, such a move is a rare phenomenon. It is like imagining that President Buhari will consider standing down since the country is already prostrate before him, badly crippled by very poorly managed and rundown economy, intractable insecurity situation which appears to have overwhelmed him and widespread poverty, unemployment and the collapse of virtually every institution that provides social amenities.

Well, back to Liberia. How President Weah hopes to overcome the growing opposition against him and revive a collapsing economy remains to be seen.

I’m confident that Kim Jong Un will honour our contract. –...