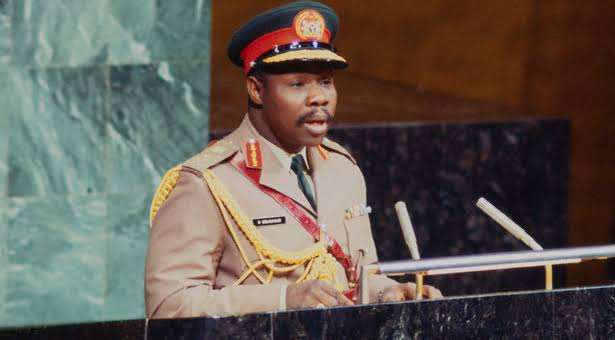 Read this 1986 letter by then Rtd General Obasanjo to British PM, Margeret Thatcher, over apartheid

Obj has been writing open letters for a long time. Here is one he wrote on behalf of those South Africans now killing our citizens, addressed to Margaret Thatcher, the leader of one of the world’s greatest nation at a time few would have dared to do so.

After our meeting on Sunday, I write as one committed democrat to another. Yours is an old country with a lengthy democratic tradition; mine a new country undergoing a press of nation-building. But as democrats, we can be frank with each other.

As you know, I came to the EPG (Eminent Persons’ Group) mission with reluctance. It was difficult enough for me as an African and especially as a Nigerian to contemplate exchanging pleasantries with those responsible for the institutionalised oppression of so many of my brothers and sisters.

My repugnance was exacerbated by the widely held perception that the EPG was a substitute for action won by you at Nassau for the benefit of P.W. Botha. However, I persuaded myself that whatever the odds, the prize was so great that I should overcome my personal feelings.

Not that I was prepared for what we found. As you know, even Tony Barber – a frequent traveller to South Africa – was appalled by what he was to see in that other South Africa which visitors seldom see. We jointly expressed our shock and dismay in our report.

I have seen extremes of poverty and of oppression in many parts of the world. But South Africa unashamedly moulds both elements into a system which enables the white minority to enjoy a “Dallas” lifestyle at the expense of the great majority forced to endure conditions as degrading as anything I have seen anywhere.

In our discussions, Malcolm Fraser and I tried to convey the true nature of the system and were against cosmetic changes which have merely softened the face of apartheid.

However, such was our discussion that I must ask: Did you even read our report?

I infer from what you said that afternoon that you had not. You concentrated on the trivia of the Government’s “reforms” – like the welcome but essentially insignificant repeal of the Mixed Marriages Act – and ignored their implacable opposition to changes in the basic pillars of apartheid.

As we emphasised, to begin to dismantle apartheid, the Population Registration Act and the Group Areas Act must be repealed without being replaced by some measure designed to achieve the same ends under a different guise.

You gave credence to the dangerous notion that the political rights of the dispossessed can be adequately met by what President Botha calls “group rights” at the expense of individual rights and freedoms. Despite all the talk of “power sharing” between different communities, our inescapable conclusion was that this was a cloak for power remaining in white hands, and the essentials of apartheid continuing unchanged.

Nor have you any appreciation of the issue of violence. The apartheid system has an inherent violence which, through forced removals and the creation of barren homelands, has created the fiction of a white land and through the barrel of the gun, denies blacks any form of legitimate political expression.

We are all opposed to violence other than in self-defence. Why should blacks not have a right to defend their own families, homes and freedoms?

Your “moral revulsion” for sanctions struck me as unconvincing. The economic sanctions you so energetically pursued against Poland, Afghanistan and Argentina were brushed aside in your determination to withhold their application to South Africa. Yet to many of us there is only one significant difference: the victims in South Africa are black. Is sauce for the Aryan goose not sauce for the Negroid gander?

Your concentration of the economic effectiveness of sanctions is disingenuous if not hypocritical. Sanctions were imposed against Poland, Afghanistan and Argentina as political expressions of outrage.

Nor can your opposition be based on any assessment of where the best interests of Britain lie. Your country has considerable trade with South Africa, but this is dwarfed by that enjoyed with the rest of Africa: it cannot be in Britain’s interests to encourage them to place their orders elsewhere.

Further, your appearance as an apologist challenges the democratic forces in South Africa to seek help from whatever quarter they can. The longer-term consequences for Britain, the United States and the West could be considerable.

But most of all, I was dismayed by your lack of vision. You offered no action as an alternative to sanctions. You insisted that nothing whatever be done – even though in the final analysis you moved a little. There is no vision of a way ahead; simply a forlorn hope that P.W. Botha would experience a “Road to Damascus” conversion on the road to Soweto. Such hopes are in vain.

Sooner or later, Botha or his successor will be driven to negotiate meaningfully. Sir Geofferey’s visit again confirmed that Botha is not yet under sufficient pressure to do so – despite a dwindling rand, escalating inflation, a declining economy and mounting violence. More pressure must come.

I must tell you that many people around the world view your continued opposition to sanctions as founded on instinct, not logic and as displaying a misguided tribal loyalty and myopic political vision. The consequences of such perceptions are far-reaching for a country which has traditionally claimed the high ground of principle.

Not only does the mental laager of the Boer seem to be mirrored in your own attitudes, but his fatal concessions of too little, too late are paralleled by your actions.

I am glad that the Commonwealth has moved on without you and I know that sooner rather than later, Britain will have to join us. I also know that apartheid will end, and its demise will be the product of a combination of internal and external pressures. The equation is a simple one. The less the external pressure, the greater will be the price to be paid internally.

Those who seek to minimise sanctions and their effect will have the blood of thousands, if not millions, of innocents on their hands and on their consciences. My heart will be heavy but my hands will be clean. Will yours?”

(General Olusegun Obasanjo was Head of the Federal Military Government of Nigeria 1976 – 79 when he handed over power to an elected civilian government. He was later elected President of Nigeria from 1999-2007.)

Edo 2020 Election Under Threat. Saboteurs Within!