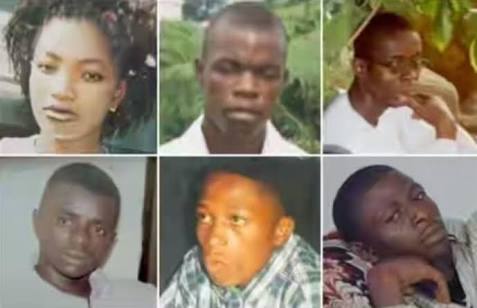 Fleeing former Divisional Police Officer (DPO) of Garki Police Station, Chief Superintendent of Police, (CSP), Othman Abdulsalam, who was implicated in the killing of six Igbo traders in Apo, a satellite town in Abuja, 14 years ago, is presently the Chief Driver to Governor Nasir el-Rufai of Kaduna State, Pointblanknews.com investigation can authoritatively reveal.

CSP Othman Abduldalam had strangled the only female victim, Augustina Arebu, who lived longer than other victims after the shooting.
He had fled Abuja when the matter heated up after then President Olusegun Obasanjo ordered an inquiry into the gruesome killing of the young traders at Gimbya Street, Area 11, Abuja, while returning from a night club.

The DPO had told one of his colleagues then after a manhunt was launched to track him down that he had gone far. “Forget me, I don go far, far. They no go fit catch me again”, he had said in pidgin English.

The discovery shows a pattern of protection provided for the two major characters involved in the killing of the young Igbo spare parts dealers, namely DCP now AIG Ibrahim Danjuma and the former DPO Abdulsalam, who are Fulani.

The police officer who ordered the killing, then Deputy Commissioner of Police, DCP Ibrahim Danjuma, has since been discharged and acquitted by Justice Ishaq Bello, a Fulani, and reinstated in the police force, paid his arrears of salary since 2005 when the incident took place and has since been promoted to Assistant Inspector-General of Police (AIG).

He has also attended a senior management course at the Nigerian Institute for Policy and Strategic Studies (NIPPS), Kuru, Jos, Plateau State, thus positioning him for a higher responsibility in spite of his criminal baggage.

Danjuma has maintained a low profile, avoiding public attention especially contact with the media, moving in disguises and tinted vehicles, ignoring in the process the huge capacity of media memory.

Pointblanknews.com has learned through diligent investigation that Othman Abdulsalam, is the Chief Driver to Governor Nasir el-Rufai presently. Banking on the short memory lifespan of Nigerians, the governor deliberately employed him, having worked closely with the DPO in Abuja.

Elrufai was the Minister of the Federal Capital Territory, FCT, when the DPO was implicated in the killings. Curiously, the wanted DPO is still on the payroll of the Nigerian Police. “He was never fired by the police. He was transferred to the CID Department of Police to hide his identity and to avoid wearing police uniform.

He is now the chief driver to Governor el-Rufai. In that position with dark spectacles most of the time, he can never be found so they thought. “But he has even forgotten that he committed any such offence. He was in hiding in the first few years after he stayed in Niger Republic for some time. As it is now, he is even scheming to get a higher position in the security team of the governor”, a dependable source said.

Then DCP Ibrahim Danjuma then in charge of Operations in Abuja including the team overseeing presidential movement, had made advances to the female victim at a night club located at the Gimbiya Street Area 11, who turned him down. As they drove out of the street in a 406 Peugeot car, Danjuma radioed the next police checkpoint to halt them.

At the Garki Police station where they corpses were taken, the DPO ordered the killing of some of the traders who had jumped out of the police vehicle but were later re-arrested.
The female amongst them who was also shot, was still breathing at the police station and the DPO had to personally strangle her in a bid to cover up any evidence that may arise from there.

CSP Othman Abdusalam also supervised the burial of the victims in shallow graves at Utako District of Abuja before the panel of enquiry exhumed them for autopsy.