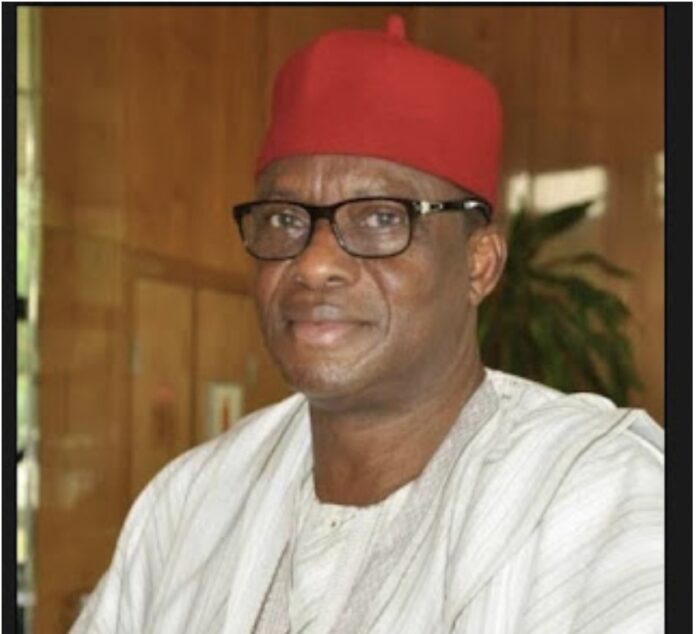 …Consultation ongoing for his recall

A news report had gone viral yesterday where Prof. Ihonvbere, the lawmaker representing Owan Federal Constituency purportedly condemned Senator Francis Alimikhena and other Senators who voted against the e-transmission of election results. The lawmaker made the statement at a town hall meeting in Afuze where he delivered his midterm report to members of his constituency. He also addressed the press after the meeting.

However, in a swift reaction the lawmaker through his media aide, Bright Iriekpen made a feeble attempt to debunk the viral report insisting that the lawmaker was quoted out of context. Bright Iriekpen said
“The news report alleging that Prof. Julius Ihonvbere, the HOR member representing Owan Federal Constituency, purportedly “condemns Senator Alimikhena for voting against e-transmission” is false and should be disregarded by members of the public. The platform responsible for the report betrayed journalistic ethics and standards by adding a mischievous twist to a broad, impersonal statement made by the Reps member on an important national issue, therefore sacrificing truth, which ought to be the most important element of any report, in a consuming pursuit of cheap clicks and virality”

Minutes after Bright Iriekpen debunked the statement, a video surfaced online where Prof. Ihonvbere was actually seen addressing his constituent as well as the press and the video shows he clearly condemned Senator Alimikhena as well as other Senators who voted against the e-transmission of results. The Prof said “ I support electronic transmission of result, I know INEC has the capacity for electronic transmission, unless INEC wants to say those card readers they sent to different parts of the country are for decoration, in which case, all the elections where we used them will be canceled. But it is not! The card reader uses sim and in the over 190,000 polling booths there are card readers using sim. People are writing WAEC, People are writing NECO, they are doing computer based test . Nigeria must move forward. When are we going to grow and agree that where we are, we should leave . Other countries are moving forward , Rwanda ,Ghana around us . So, I support the electronic transmission”.

Seasoned journalists have also weighed in on the debate and most of them are of the opinion that the lawmaker took a swipe at not just only Senator Alimikhena who is from the same state with him but other Senators of APC that voted against the e-transmission of results. A veteran journalist and former NUJ Chairman, Edo state Chapter, Mike Aladenika said “I read the report before I watched the video and I can tell you there is no much difference. He actually condemned those who voted against e-transmission of election results, of which Senator Francis Alimikhena is one of them. The medium that first reported the news is based in Edo state, so you would expect him to localise his report. A national medium would probably use a different headline to nationalise his report. It is absolutely normal in journalism. Therefore; both the reporter and the media House are in order. While Eben Enasco of Silverbird Television said the young reporter was right in his report as Senator Francis Alimikhena was one of the lawmakers Prof. Ihonvbere complained were dragging the nation backwards for voting against the e-transmission of election results. Monday Ogboe, another journalist also said that both professor Ihonvbere and the reporter are in order and advised the lawmaker to be proud of his statement.

However, since the report went viral yesterday, Edo people have praised Prof. Ihonvbere’s statement for his patriotism and urged him to continue to speak out in the interest of his people, while Edo North Solidarity Movement who had earlier chided Senator Francis Alimikhena for voting against e-transmission of election results have also heaped praise on Prof. Ihonvbere over his support for the bill and went further to call on other well meaning groups in Edo North to join them in initiating the recall of Senator Alimikhena before he completely bring Edo North into disrepute.