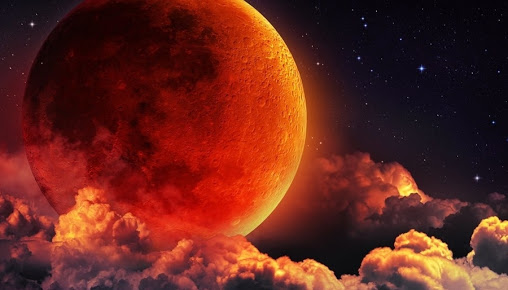 It’s a rare treat for skywatchers as the longest “blood moon” eclipse of the 21st century started on Friday.

Astronomers and skywatchers in the UAE and across the globe have turned their eyes to the sky to catch a glimpse of the rare celestial phenomenon.

Cloudy skies played bit of a spoilsport as the moon played hide-and-seek with skygazers in UAE.

As it progresses, Earth’s natural satellite will turn a striking shade of red or ruddy brown.

The maximum eclipse will last nearly 103 minutes while the whole event will run from 9.14pm to 3.28am in the UAE.

On the same night and over the coming days, Mars will be at its closest point to Earth since 2003 – visible as a “bright red star” where skies are clear.

The Moon will pass right through the centre of the Earth’s shadow, at the shadow’s widest point.

Umbra: The darker, central part of the Earth’s shadow

Penumbra: The lighter, outer part of the shadow cast by our planet

Penumbral eclipse begins: This starts when the outer (and lighter) part of the Earth’s shadow begins moving across the Moon

Maximum eclipse: The mid-point of totality

Total eclipse ends: The umbra starts moving away from the Moon’s face after totality

Penumbral eclipse ends: The outer part of the shadow (penumbra) completely moves away from the Moon