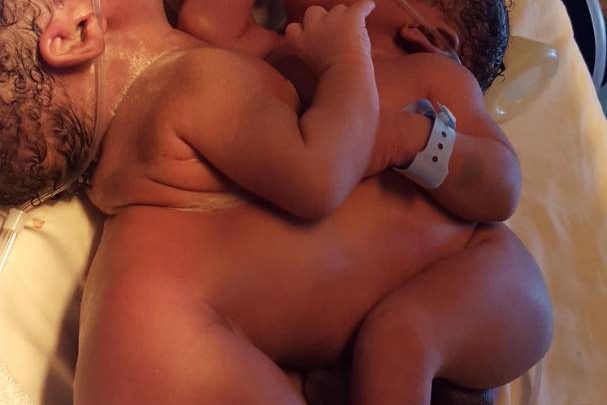 The boys’ arrival came at about 10:30 a.m yesterday morning through Caesarean Section. Information reaching Aledeh confirms that their father is Youth Corp member while their mother is a full-time housewife.

Typically known as “Siamese twins,” the condition comes with the babies sharing same organs in some situations as they join at different portions of the body.

Scans so far have revealed the babies have two kidneys, two hearts but one liver. Siamese twins are rare occurrences as it occurs in 1 in 189,000 births in the continents they are most commonly found, Africa and Asia.

This is yet another feat by the medical team of Oghara Teaching Hospital which was commissioned by former governor Dr Emmanuel Uduaghan.

Aledeh is calling on the Delta State Government to come to the aid of the couple. It is also expected that well meaning Nigerians will contribute their quota to the young couple and also encourage the hospital and others not to rest on their oars as they help improve Nigeria’s health system.