Home News Wole Soyinka to Buhari- Stop subverting rule of law like you did... 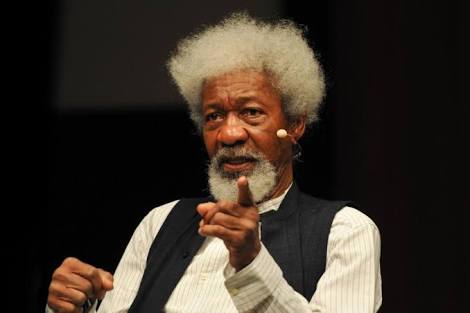 NOBEL Laureate, Prof. Wole Soyinka on Thursday warned President Muhammadu Buhari to stop subverting the rule of law like he did under the military regime he headed between 1983 and 1985.

Soyinka said this in a statement made available to newsmen in Lagos in reaction to declaration by Buhari that national interest was more paramount that the rule of law, among others.

The Nobel laureate, in a statement, titled: “Buhari’s Pernicious Doctrine,” while recalling that Buhari as military dictator and hiding under “national interest,” sent two journalists, Nduka Irabor and Tunde Thompson to jail in flagrant abuse of press freedom, said sadly that the same scenarios were being played back in a democratic regime.

“Here we go again! At his first coming, it was, ‘I intend to tamper with Freedom of the Press,’ and Buhari did proceed to suit action to the words, sending two journalists – Irabor and Thompson – to prison as a reward for their professional integrity.

“Now, a vague, vaporous, but commodious concept dubbed ‘national interest’ is being trotted out as alibi for flouting the decisions of the Nigerian judiciary. President Buhari has obviously given deep thought to his travails under a military dictatorship and concluded that his incarceration was also in the ‘national interest,” Soyinka said.

The Nobel Laureate, however, said Nigerians had cause to be thankful that President Buhari was given advance warning of the disaster he was bringing, noting that the citizen needed to be grateful since not all rulers actually made a declaration of intent, but simply proceeded with their actions.

“The timing is perfect, and we have cause to be thankful for the advance warning, since not all rulers actually make a declaration of intent, but simply proceed to degrade the authority of the law as part of the routine business of governance. We have been there before,” he said.

Soyinka said it should be of mere interest, not despondency, that this latest proclamation of dictatorial recidivism had also been made before an assembly of officers of the law, the Nigerian Bar Association, saying that he expected a robust response from the NBA as part of its conclusions.

The Nobel Laureate insisted that there was no short cut to democracy, as the history of law, even where uncodified, was as old as humanity, saying that numerous rulers had tried again and again to annul that institution, while sometimes, they appeared to succeed, but that in the end, they paid heavy for it.

“So does society. The rule of law, however, outlasts all subverters, however, seemingly powerful. If the consequences for society in defence of the rule of law were not so costly, any new attempt would be merely banal and boring, hardly deserving of attention. We know, historically, where it will all end,” he affirmed.

Cattle Ranching in Botswana Versus Cattle Grazing in Nigeria.