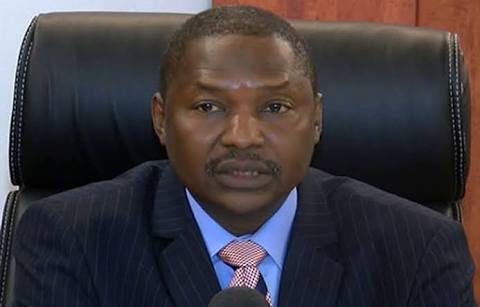 The United States has said it will only deal with Nigeria on a government-to-government basis for the restitution of $500 million Abacha loot, senior presidency sources have informed TheCable.

Officials of the US Department of Justice (DoJ), according to the sources, told President Muhammadu Buhari pointblank during his visit to the US that they would not deal with any third party in the restitution of the funds.

The Attorney-General of the Federation (AGF) and Minister of Justice, Abubakar Malami, had attempted to engage private lawyers who were going to take a cut as “legal fees” — even though they did not play any role in the recovery of the stolen funds traced to the late former military Head of State, General Sani Abacha, who ruled Nigeria from 1993 to 1998.
The recoveries were made in 2014 by President Goodluck Jonathan government and domiciled with the US government — and all the lawyers involved had been paid four per cent of the funds as their fees.

The funds were to be returned to Nigeria on the condition that the federal government would sign a memorandum of understanding (MoU) to avoid the mismanagement associated with recoveries under former President Olusegun Obasanjo.
In 2016, however, Malami went ahead to appoint two Nigerian lawyers again — in a pattern very similar to the $321 million Abacha loot recovered from Luxembourg also in 2014 for which the lawyers he hurriedly engaged were to be paid almost $17 million for doing nothing.

In the Switzerland case, Malami appointed Oladipo Okpeseyi, a senior advocate, and Temitope Isaac Adebayo in 2016 apparently to replicate the job already done.
Incidentally, Okpeseyi and Adebayo were lawyers to the Congress for Progressive Change (CPC), the All Progressives Congress (APC) legacy party of which Malami was the legal adviser.
He also proposed to use the same lawyers in the US case, but TheCable understands that the department of justice has consistently refused to entertain them, thereby stalling the return of the money to Nigeria.

America has now promised to return the $500 million but without the involvement of the appointed intermediaries.
The Nigerian Government has also undertaken to spend the money on social protection programmes.
According to documents seen by TheCable, the DoJ initiated a legal action in November 2013 on the request of then attorney-general, Mohammed Bello Adoke, to confiscate assets worth $500 million traced to the Abacha family in France, Jersey and the UK.

Although the funds were not in the US, they fell foul of America’s money laundering laws having passed through the country in one form or the other.
Following a civil forfeiture complaint, the DoJ froze $280 million of Abacha Loot in Jersey, $140 million in France and $40 million in England.
Under US rules, any claimants to the asset were required to file a claim not later than 35 days after direct notice was sent to them or 60 days after the publication of notice.
Neither Mohammed Abacha, son of the late dictator, nor his companies filed any such complaint within the period until it expired.