Home News THE TALE OF TWO IDIOTS AND A VILLAGE. 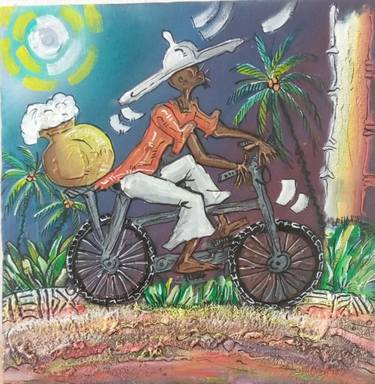 Efulefu and his gang take over the village square, beating metal gongs ever so ferociously and deriding the village palm wine tapper of doing a horrendous job.

Efulefu promises everyone that he has much better skills at tapping palm wine, skills so magical it will undo the shameful service of the present tapper.

All the villagers need to do is boot out the half human failure and give Efulefu his job.

The villagers do not only listen with keen interest, they wholeheartedly oblige Efulefu’s request laced with boastful assurances, they join forces and chase out the unfortunate cheat who has been accused and found guilty of mixing the wine of life with rainwater.

The villagers show Efulefu to the only pathway leading to the trees that bring forth the rich juice, they hand over to him the knife, the hat and woven frond band used for climbing.

Efulefu jubilates ecstatically, finally he has conquered.
Six rains have gone by now, since Efulefu became the village palm wine tapper and now the wine tastes like the smoke which rises when expired gunpowder burns.
It is no longer a rumor that Efulefu mixes the wine of life with water from the part of the stream where bush pigs defecate.

Efulefu continues to blame the old tapper for using up all the rainwater even though rain still falls and the wine of life was never meant to be diluted in the first place.
The villagers begin to complain because their mouths are now permanently filled with the taste and smell of burning expired gunpowder.

Efulefu’s gang begin by telling the villagers to be patient and then switch to threats, to put in fresh gunpowder into the mouths of the villagers and ignite it with a wild fire.
The villagers are now flushed from thirst and dehydration, saddened and dejected.

Efulefu no longer hears the cries of the people, he slumbers in a state that makes abject delirium look like heavenly bliss.

His gang takes over and the enjoyment of wine seems like what will never return to normal life.

Efulefu’s gang continues to blame the old tapper as the village and villagers are ravaged by distrust, hatred and anarchy.