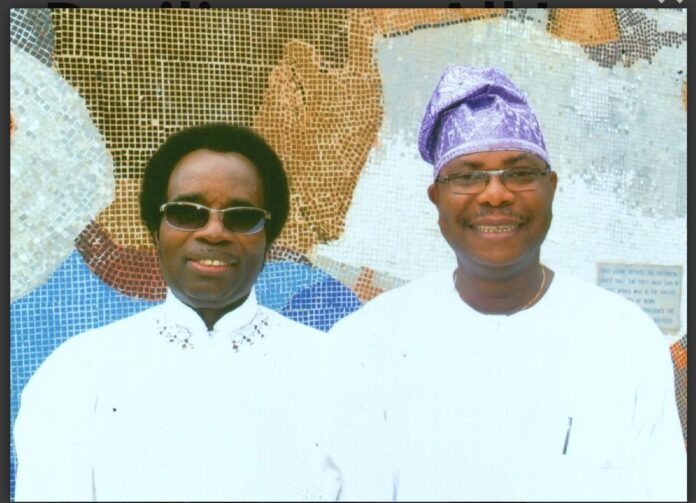 On the 1st of March this year, I wrote a short post, which partly read: “Happy 80th birthday to an icon of our times, Sir (Prof) Victor Uwaifo, MON. THE LEGEND! Keep enjoying your life……….Ad multos annos to the legend – Victor Efosa Uwaifo, Guitar Boy”.

That wasn’t the first time I would celebrate or write about him but as it has now turned out, it was the last birthday the great man would celebrate on the face of the earth, having passed on this weekend – 28th August 2021.

The last time we met one-on-one was at the Holy Cross Cathedral in Benin in May 2013 when he just turned 72, but looking boyishly ageless, while me, at 59, showed grey hair under my cap., as seen in the featured image, with his full head of hair.

At that meeting, we reminisced about old times, especially our first major encounter in his home around 1988 when I had to travel to Benin at the instance of the Government of Canada to meet with him in his nicely designed home, with lots of art forms – paintings, sculptures and books. There was some business that was outstanding between the High Commission and him and when I joined the mission, it was quickly decided that a ‘son of the soil’ like me was the ideal person to help cement the relationship.

I had seen him on TV, performing at several State functions since our 2013 meeting and was even at a wedding in Benin where he was the main act in 2017, but we did not meet or chat. One thing that was always clear was his versatility, energy and stage presence which age did not seem to have affected. He always looked fit and was boisterous in laughter.

As a young man growing up in Benin, many of us craved the opportunity to meet with such a popular person that you only heard about through his music and on radio or television. I was luckier than others, because while in high school, I had a friend who was into music and took us to shows that were organised in the 70s which featured such Lagos-based musicians like Fela, Segun Bucknor, Tee Mac, BLO who came to Benin to perform either at UNIBEN, Ogbe Stadium or the Ring Road. We played our part by being ‘gate men’ and ticket sellers and this brought us close to the performers like him. When these musicians came to Benin, Victor Uwaifo was always The King to pay homage to and his name would sell any event if he was included in the promotion. The promoters and musicians all respected him and he was mentor to many younger artistes worldwide.

A lot has been and will be written about Sir Victor Uwaifo and his music – Joromi, Akwete, Titibiti, Guitar Boy, Mami Water, Ekassa, etc – but there is no doubt that he was the most learned and educated performing musician in Nigeria. I am not a student of contemporary African or world music but I doubt if there has been also any other performing musician with the array of academic qualifications as Sir Victor.

All these gave him the recognition as the most educated performing musician and instrumentalist, who was also a Professor in the University of Benin.

With a total of 12 Golden and 2 Silver records, he had over 600 songs in his music arsenal.

My friend and brother, Soni Irabor, wrote a eulogy over the weekend in which he buttressed this position:

“The Benin man with a sonorous voice.

The restless Edo man who is proudly Nigerian,

The music maestro who invented the double neck Guitar!

The Legend that won accolades for his Country and his State.

The Joromi Crooner whose 1965 song JOROMI is still a hit today!

In that song, Prof (You always reminded me never to forget that you were now a Professor), you admonished Joromi not to wrestle with the spirit saying

“…you had wrestled in this world… you maybe on your way to the great beyond…. Kese Kese Joromi ooo omi jo!” You would sing sonorously in Benin language.

Sir Victor were you referring to yourself 56 years ago today?

Bros. You have run a great race. You left an indelible legacy that will be very hard to fill.

The consolation is that there will be a lot to learn from the works you left behind in Art, Music, Sculpture and many more disciplines.

Nigeria is proud to have you as an exceptional citizen.”

Many musicians seem to court controversies and scandals, mostly due to poor morals over bloated egos. Not Sir Victor.

He was many good things to many people. A Student. A Teacher. Musician. Sculptor. Artist. Technocrat. ‘Almost’ Politician with his Commissioner appointment. Entrepreneur. Employer of labour. Multi instrumentalist – he wasn’t just a guitar boy – he played several other musical instruments like the piano and flute.

His trademark dark shades and flamboyant suits were all unique to him. A man of class. A man of character. A man of style. What a man!!