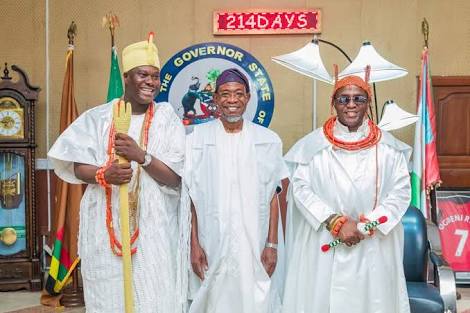 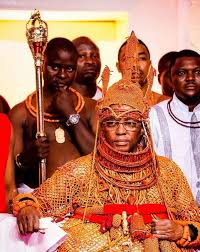 The Benin Monarch, Oba Ewuare II has called on the Osun State Governor, Ogbeni Rauf Aregbesola to mobilize his colleagues in the Governors’ Forum to tackle the problem posed by cattle herdsmen that seems to have colonized the country.Oba Ewuare II made the call when he visited the Osun State Governor at the State House in Osogbo, as part of his nation-wide Post-Coronation thank you tour.

The Benin Monarch wondered whether the problem was the herdsmen or the powers behind the herdsmen, and called for adequate protection of the porous national borders.

He thanked the Osun State Governor for his several visits to Benin especially for attending his coronation ceremony in October 2016, pointing out that the culture of Benin Kingdom was very important to him, and as a result he was committed to promoting, protecting and propagating it.

Oba Ewuare said in order to ensure peace and development in the Kingdom, the activities of Community Development Association, which hitherto hindered progress and development have been banned, and called for all hands to be on deck to solve the problem of human trafficking and irregular migration, saying that it was not the problem of Edo State alone.

According to him, the Palace has tried to discourage human trafficking and irregular migration through royal pronouncement against human traffickers, adding that the Oba Ewuare Foundation was established, among others to assist the victims of human trafficking in training and skills acquisition.

The Osun State Governor, Ogbeni Rauf Aregbesola, in his response said the visit of the Oba of Benin was remarkable and significant, describing the Benin Monarch as a King that has brought dignity to Obaship (monarchy).

He said that he has great respect and honor for the stool of the Oba of Benin, adding that the reign of Oba Ewuare II has brought great development to Benin Kingdom.

Aregbesola noted that the visit of the Benin Monarch has re-enacted the old tradition that had existed between the Yorubas and Edos, and called on the people to strengthen the cultural affinity, and prayed that the reign of Oba Ewuare II will strengthen that bond.

He promised to champion the campaign to eradicate human trafficking, which he described as modern day slavery.

On the problem of insecurity, the governor said it is quite worrisome, but assured that within the next few weeks there will be a reversal in the trend, as the Federal Government was already collaborating with State Governors to tackle the problem headlong. 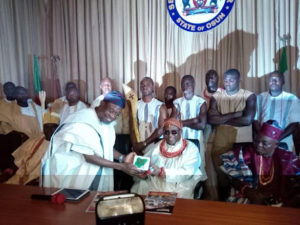