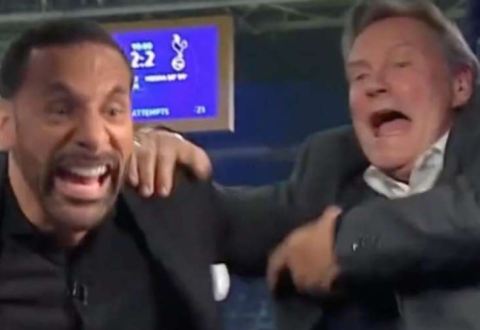 The north London club trailed 3-0 on aggregate at half-time in Amsterdam last night, but produced a comeback of epic proportions just 24 hours after Liverpool had produced an equally stupendous act of escapology against Barcelona at Anfield.

Hoddle, 61, suffered a heart attack on his birthday last October in the BT studio, where he received emergency CPR treatment, but has staged a dramatic recovery of his own and was overcome with emotion after the club he represented on over 400 occasions sealed their place in the showpiece final in Madrid next month.

‘I’m so glad I’m still around to see that,’ said the former England manager after he’d been practically manhandled by Ferdinand during the raucous celebrations.

‘Two footballing miracles in two nights. Tottenham only had 45 minutes to score three goals. ‘Incredible, incredible, emotions flying in here as well.’ After re-watching the footage, Ferdinand jokingly tweeted: ‘Glenn, Are you ok…are you ok.’

On Tottenham’s remarkable achievement and what it could mean for Pochettino and the future of the club, Ferdinand added: ‘He can go to Daniel Levy now and say listen the last player I bought was Lucas Moura and look what he’s done tonight.

‘Those players were a representation of their manager, all heart. They’ve been fantastic, a great advert for pure football but this game can be cruel. ‘There’ll be times when this situation happens and it’s about how to pick yourself up from here.

‘If there were some players sitting in there with some of the results they’ve had and thinking this is falling apart then this could be a catalyst.

‘There’s no better advert for new signings watching this and they’ve got a manager you would want to play for. In the first game Llorente didn’t go and pick on Blind but today he’s been told to. ‘He couldn’t deal with him physically and that’s where the winning goal comes from. I said it before when Dele Alli plays off the front, in terms of timing and runs into the box, he’s up there with the best in the world.’