Home News JUST IN: Police to move Dino Melaye with Helicopter to Kogi by... 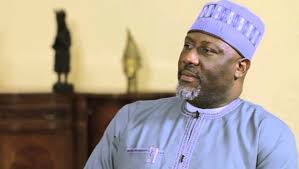 The Nigerian police force is geared to move embattled senator, Dino Melaye from Abuja to Kogi state by helicopter to face trial on allegations of gun-running and criminal conspiracy.

Investigations reveal that Melaye might be flown to Lokoja on Wednesday(today) in a police helicopter in a desperate attempt to move the senator after the last attempt to move him by road failed.

Melaye, who is currently admitted at the National Hospital Abuja after sustaining injuries while resisting his forced movement to Lokoja by the operatives of the Special Anti-Robbery Squad (SARS), last Saturday overcame his recalled process as the people of his senatorial district refused to recall him.

He is the first Nigerian lawmaker to survive a recall move, which was apparently instigated and heavily financed by the Kogi State Government.

According to Thisday, the plan to take the senator to Lokoja for the second time would take place today (Wednesday) and the means had changed from land to air transport for “security reasons.”

It was gathered that the latest move by the police is contrary to medical advice from the authorities of the National Hospital in Abuja, a similar scenario that played out last Tuesday night at Zankli Hospital where Melaye was initially hospitalised, a development which led to the arrest of a medical doctor and Melaye’s younger brother.

Hospital sources reveal that Melaye was not in good health and not fit enough for travel at the moment. The embattled senator had earlier cried out that some people want to assassinate him for the crime he did not commit.

However, the case is billed for hearing in Abuja as directed by the acting Chief Judge of the Federal High Court, Justice Abdul Kafarati