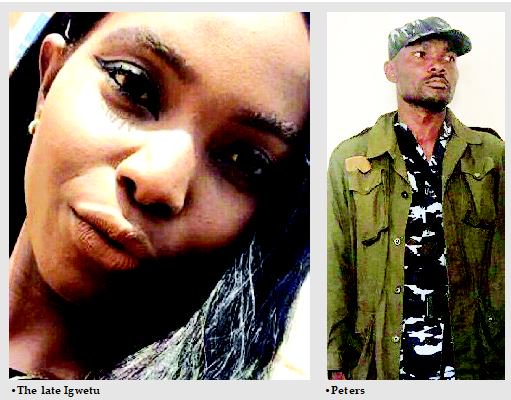 The deceased, Linda Angela Igwetu, was billed to pass out of the NYSC programme today after a compulsory one-year service in Abuja.

She served at Outsource Global Company in Mabushi.

The late Corps member was said to have gone out with her friends, as part of celebration for the completion of her year service.

Narrating what happened, the Convener of

#EndSARS #ReformPoliceNG, Mr. Segun Awosanya said: “She finished at work late at 11 p.m (Tuesday) and joined a few friends for a hangout before their passing out parade scheduled for Thursday (today).

“They left for home around 3 a.m (Wednesday) and was shot at shortly after the checkpoint near Ceddi Plaza by a police officer, identified as Benjamin Peters.

“The bullet hit Angela on her side, by the midriff, and she began losing blood in the open roof vehicle.

“She was rushed to the Garki Hospital but they would not treat her until they saw a police report, despite the fact that the police officers were present. While the deliberation was ongoing, Angela bled to death.”

Awosanya said the case was taken to the Federal Secretariat Police Station.

He also said his group was awaiting the police report on the incident, adding that they had written a petition to the police commissioner and the Force headquarters in Abuja on the matter.

Awosanya also said the case would go to court.

He added: “The police said they saw a convertible car and they did not know those inside. Then, the policeman who shot at them, said that he heard ‘help!’ in his subconscious.

“My question is: even if you heard a cry for help in your subconscious, is the solution to firing at the person who was shouting for help? You could not stop them, double-cross them or find a way to stop the vehicle to be sure everyone was okay; you instead opened fire at them?

“I think this is a lie. They are only trying to cover up their evil acts.”

When The Nation contacted the police, a source in the Force, who pleaded anonymity, said: “We don’t know what actually happened but investigation is ongoing.

“The truth is that our men were at the checkpoint when they heard someone shouting for help from a car that was approaching.

“In responding to that, they tried to stop the vehicle where the deceased was, but the driver zoomed off when they got to the checkpoint. We don’t know the motive behind it, but I am sure a discreet investigation would be carried out to reveal what actually happened.”

Police spokesman Anjuguri Manzah, a Deputy Superintendent of Police (DSP), told The Nation on phone that the command was investigating the incident.