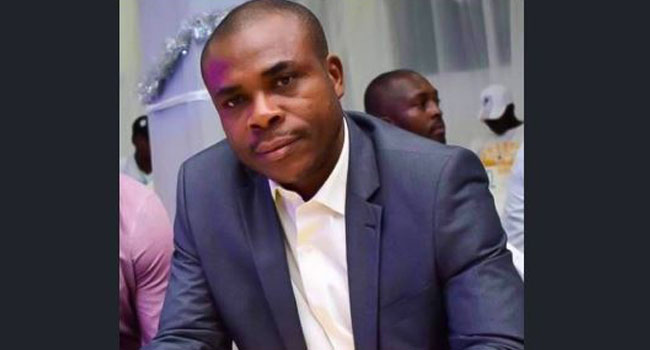 For John Mayaki, hallucination seems to be the major way he copes with the crushing defeat he suffered being the attack dog of the defanged gang of godfathers who tried to subvert the will of Edo people and hijack the people’s patrimony to service their over-bloated ego and appetite for state funds.

Mayaki and his sponsors had hoped that President Muhammadu Buhari would deploy the apparatus of state including the military, the Nigeria Police Force, and other institutions to overturn their rejection by the people and hand them victory in the September 19, 2020 governorship election in the state. But that was not to be and this seems to have seized their sanity ever since.

As far as these disgruntled politicians are concerned, the relationship between President Muhammadu Buhari and Governor Godwin Obaseki was their nemesis in the election and so they would stop at nothing, including contrived allegations, which are a product of their delusions, to put a wedge between the governor and the president.

In their warped thinking, they cannot understand that this relationship which they so resent is established on mutual trust and respect and the fact that you do not have to belong to the same political party to be reasonable leaders.

Mayaki and his cohorts need to understand that President Muhammadu Buhari’s loyalty is first to Nigeria and Nigerians, before the All Progressives Congress (APC) and the position he took during the election to ensure that the people exercised their franchise freely was the only judicious step any leader worth his salt would take in such circumstance.

Although this paradigm is completely alien to the character of these Edo People Movement (EPM) ilks, which Mayaki represents, it must always be the people first, before personal and political interests.

In his article, ‘The Hypocrisy of Obaseki’s relentless attack on President Buhari and the APC,’ Mayaki sought fruitlessly to raise contention between the president and Governor Obaseki, but forgot to cover the tracks that revealed his motivation to be the crushing pain of defeat and the inescapable bitterness of having to wake up everyday with the realization that Obaseki, who they so vehemently vilified, sits as Governor of Edo State in Dennis Osadebe Avenue.

After scouting for the most potent instrument for his mudsling, he settled on a statement by the Peoples Democratic Party (PDP) Governor’s Forum, in which a mass of governors endorsed the resolution of their meeting in Makurdi, Benue State, calling for better management of the economy and offering an alternative to the APC-led federal government.

Much as the statement had all the trappings of an opposition slingshot on the President – as is the norm in a multi-party-political system, it was disingenuous and infantile for Mayaki to rephrase the statement to make it seem as though it was the sole opinion of the governor and therefore proceeded on his tirade against him.

Not done with this ignoble assignment, he went on to claim that the governor’s comments on the central government’s dwindling finances on account of the turn by the global West to renewable energy as against fossil fuel as being ‘baseless and irresponsible.’ He noted that the claim was refuted by people who, according to him, do not want to be named. If Mayaki had the most elementary training in journalism, he would know that statements from official quarters that are attributed to faceless and nameless sources are at best speculative.

In his rambling, he raised issues about the governor’s efforts to reclaim stolen state government landed assets and it would appear that he and his paymasters have become so accustomed to fraudulent acquisition of government property that they have somehow managed to convince themselves that these stolen assets are actually theirs. Little wonder these politicians virtually converted almost all of the government land in prized locations in the Government Reserved Area (GRA) as their personal largesse. As the government has stepped up efforts to reclaim this property from these persons, they see the move as punishment and a witch-hunt.

We have it on good authority that Mayaki who authored the article is allegedly being investigated for converting and selling off a government property along Boundary Road, GRA, Benin City. This is one of those that are now being recovered by the government. With this, it would seem he, along with his cohorts, are fighting to make a return and continue to have a field day pilfering and appropriating government assets to themselves.

It is only reassuring that Edo people are now very much aware of the malignant character of Mayaki and those who bankroll him, as they have since been sentenced to ignominy. The people in Edo, will continue to carry the day and overcome the antics of false saviours and the slight underhand wrangling of defanged and defeated godfathers. Indeed, people power have and will continue to prevail in Edo State.

Osagie, an Editor with THISDAY Newspapers (on leave of absence) and public commentator, writes from Benin City