Home News Obaseki: Only PDP can save Nigeria from current socio-economic woes 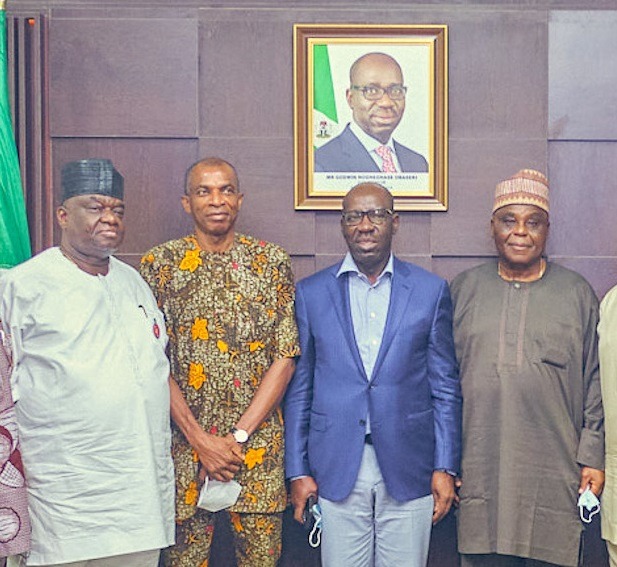 The Edo State Governor, Mr. Godwin Obaseki has declared that only the Peoples Democratic Party (PDP) can rescue Nigeria and place it on the path of economic prosperity and sustainable development.

Obaseki stated this when he received members of Atiku Support Group, led by Chief Raymond Dokpesi, who were on a courtesy visit at the Government House, Benin City.

According to him, “If Nigeria is going to be salvaged, PDP has to step into the throne to salvage this country politically. The stakes are too high; we cannot allow Nigeria to continue the way it is going.

“Our great party must come to the rescue and take over the reins of power in this country. What we see ahead is not pleasant at all. I just pray that God Almighty sees us through next year, financially, so that we can even have presidential elections.”

He continued: “I don’t just see how we can continue to be deceiving ourselves. We try to prevent the country from growing by limiting and restricting imports, coming with all forms of phantom excuses to limit people from buying and importing what they cannot produce and need to live.

“On the other hand, they are restricting foreign exchange availability; they are just throwing millions of Nigerians into poverty.”

“My commitment today is to our great party, the PDP. I accept the responsibility of leading our e-registration process. We have done a very successful pilot in Edo, which I am hoping that the new committee will adopt so that we can roll out and build membership across the country. The soul of our democracy is making sure that we build our party like institutions,” the governor noted.

Addressing members of the delegation, Obaseki stated, “The decision is of the majority of our people, which is the way we will go. Atiku Abubakar is a Nigerian that is committed to this country; his achievements are visible. So, he is eminently qualified to contest the position of President of Nigeria and as you know, at the end of the day, power ultimately comes from God.”

On his part, Dokpesi commended the governor for his giant strides and transformational projects embarked upon by his administration since he assumed office.

He noted, “The way and manner that people are suffering across the country is not acceptable. We have never been so divided as a nation; everybody now refers to us as the poverty capital of the world. All the indices clearly show that we are a failed state.

“Even in Abuja, we are afraid of the possibility of invasion by Boko Haram, bandits, and unknown gunmen. The APC-led federal government, without mincing words, has failed totally in fulfilling the promises they made in 2015.”