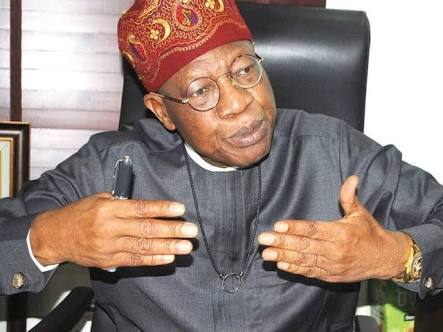 A Federal High Court in Lagos has ordered that court papers be served on the information minister, Lai Mohammed, over a list of alleged looters he released.

Our sources reported the two sets of alleged looters list published by Mr Mohammed, which largely contained names of Peoples Democratic Party members and allies who worked with the Goodluck Jonathan administration.

On Monday, counsel to one of those named by Mr Mohammed filed an application in court challenging the inclusion of his client’s name in the list and accusing the minister of contempt of court.

Ferdinand Orbih, counsel to ex-minister Nenadi Usman, informed the court that he had an exparte application which he would wish to move subject to the court’s convenience.

The court obliged him to move the application.

Mr Orbih told the court that his application was brought in pursuant to the provisions of the Sheriffs and Civil Processes Act as well as the Federal High Court Civil Procedure Rules.

He said his application was seeking leave of the court, to serve a motion on notice, on Mr Mohammed, over alleged acts of contempt.

He told the court that the minister had published a list of looters some weeks back, and had named the first accused (Ms Usman) as number 19 on that list.

According to Mr Orbih, the defence views such act very seriously, as it is an attempt to interfere with the proceedings before the court, and portray the first accused as already guilty of the charges preferred.

He, therefore, urged the court to grant the exparte application enabling the defence to serve the said motion on notice on the minister in Abuja, by substituted means, as personal service may not be feasible.

He argued that the court possessed powers to order that the motion be served on any responsible senior official of the Federal Ministry of Information and Culture, and therefore, urged the court to grant his application.

In a short ruling, Justice Mohammed Aikawa held: “I have perused the application including the supporting affidavits and I am satisfied that the application ought to be granted.

“The application is granted save that it should be served on his confidential Secretary in Abuja,” he said

Some others mentioned by Mr Mohammed in the list including PDP national Chairman, Uche Secondus, and media owner, Raymond Dokpesi, have also filed similar suits challenging the inclusion of their names in the list.

Ms Usman is facing corruption charges alongside a former aviation minister, Femi Fani-Kayode, and Yusuf Danjuma, a former chairman of the Association of Local Governments of Nigeria (ALGON).

They are accused of N4.6 billion fraud.

The Economic and Financial Crimes Commission (EFCC) had preferred a 17-count charge of money laundering against the accused.

They had all pleaded not guilty to the charges.

On Monday, trial could not resume before the court as earlier scheduled, as counsel making appearance for the EFCC, Idris Mohammed, informed the court that its third witness (PW3) who ought to be cross examined, was indisposed.

He told the court that the witness, who also resides outside the court’s jurisdiction, was pregnant and following medical advice is currently on bed rest.

On that premise, Mr Idris urged the court to grant an adjournment.

The team of defence counsel, Ferdinard Orbih, Wale Balogun, and K. C Nwofo, did not oppose the application for adjournment.

The court then adjourned until October 2 for hearing of the motion on notice and for continuation of trial.

In the charge, the accused were alleged to have committed the offences between January and March 2015.

In counts one to seven, they were alleged to have unlawfully retained over N3.8 billion which they reasonably ought to have known formed part of the proceeds of an unlawful act of stealing and corruption.

In counts eight to 14, the accused were alleged to have unlawfully used over N970 million which they reasonably ought to have known formed part of an unlawful act of corruption.

Meanwhile in counts 15 to 17, Mr Fani-Kayode and Olubode Oke, who is said to be at large, were alleged to have made cash payments of about N30 million in excess of the amount allowed by law, without going through a financial institution.

Besides, Mr Fani-Kayode was alleged to have made payments to one Paste Poster Co (PPC) of No 125 Lewis St., Lagos, in excess of amounts allowed by law.