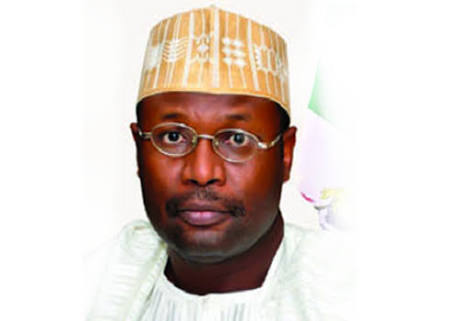 The Southern and Middle Belt Leaders Forum has demanded the removal of the chairman of the Independent National Electoral Commission (INEC), Mahmoud Yakubu.

Mr Yakubu was appointed to the office by President Muhammadu Buhari on October 21, 2015 succeeding Amina Zakari, who served as acting chairman.

But the forum at a press conference in Abuja on Sunday expressed fear he may not deliver free and fair elections in 2019.

Those at the press conference include Edwin Clark, who represented the South-south, Ayo Adebanjo, South-west; Chukwuemeka Ezeife, South-east; Dan Suleiman; Middle Belt; and Nkanga Idongesit who is also from the South-south.

The forum said “the bug of nepotism and sectionalism that this administration is renowned for has also eaten up the leadership of the commission.”

It said there were “accumulated indications” indicating Mr Yakubu might rig the election in favour of President Muhammadu Buhari.

Mr Nkanga, who is the chairman of the Pan Niger Delta Forum, said retaining service chiefs who ought to have retired and keeping Mr Yakubu as INEC boss were suspicious.

“From 1960 till date, only President Muhammadu Buhari has been audacious to pick only people who are either his relations or of the same ethnic stock with him to lead the electoral body,” he said.

Mr Nkanga also criticised the Minister of Defence, Mansur Dan-Ali, for asking states that had enacted anti-open grazing laws to scrap them, describing the directive as obnoxious.

The minister, at a Security Council meeting at the State House in Abuja last week, had urged President Buhari to reduce tension in Benue and Taraba states by suspending the implementation of the anti-open grazing law in place in the states, and to negotiate safe routes for cattle herders.

Mr Nkanga demanded the withdrawal of that statement, saying alleged shielding of armed herders by the Federal Government was the cause of tension in the country.

The forum therefore tasked the Federal Government to arrest killer-herdsmen instead of shielding them.

“The shielding of Fulani killer-herdsmen remains the strongest flashpoint of invitation to chaos and anarchy in our country as people would not continue to fold their arms forever as they are being killed with the government unwilling to lift a finger in their defence.

“We demand the immediate withdrawal of this obnoxious directive and for the Federal Government to stop the killings going on and promptly arrest those behind the killings so far for immediate prosecution.”