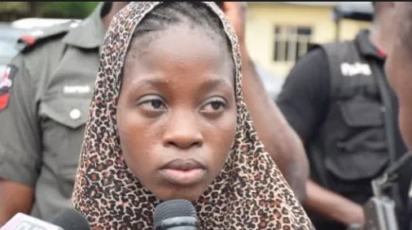 Her   facial disposition, wrapped in a haggard-looking   frame depicted innocence in all its ramification. And   the   hijab   which covers   her head, neck and shoulder, revealing only her oblong   shaped face,   elicits compassion   on anyone she approaches for help.

But her startling revelation of being the hit girl of the dreaded Eiye confraternity confirmed that  facial disposition can indeed   be deceptive. Mariam   Abiola, was born 20 years ago in Lafenwa, Abeokuta, Ogun. As she grew up, her mother,   Mrs Morenikeji Abiola, repeatedly reminded her that she would grow up to be a wealthy woman of repute in the society, according to a prophesy received at birth.

But the vagaries of life took a negative toll on her parents who could barely feed their children. As you read this piece, Abiola , said she lost both parents in a mysterious circumstance .

Unable to weather the storm, she was forced to drop out of school while in the Senior Secondary School 3.

While wandering on the streets of Lagos, she met one Sadiq Oyewunmi, whom she considered an angel who came to her rescue. But that singular meeting transformed the naive Ogun girl into a blood thirsty vampire, who today has no regard for human life.

In this interview with Crime Guard, Abiola, who was apparently oblivious of the magnitude of the crime committed disclosed how she single-handedly   snuffed life out of four persons in Ilasamaja area of the state.  Her confession was the first of its kind in the history of the Lagos State Police Command.

She further stated that she was at the verge of quitting  the Eiye confraternity, to work as an assassin for some unnamed politicians when she was arrested by policemen attached to Ilasamaja division,   led by the Divisional Police Officer, Titilayo Oriyomi, a Chief Superintendent of Police.

Recovered from her, were  two locally made revolver pistols, two live cartridges and nine pieces of 9mm live ammunition.

Prior to her arrest, Crime Guard gathered that on  Monday, July 16, 2018 a fight broke out between rival cult groups in Ilasamaja area of the state .

During investigation,  Sodiq admitted to being a member of Eiye Confraternity. He further stated that his brother , Waheed Oyewunmi, was shot dead by members of   Aiye rival cult group, allegedly led by Emeka Ihioma, during a clash.   He stated categorically that Ihioma pulled the trigger that snuffed life out of his brother.

Crime Guard gathered that Oyewunmi had concluded plans to eliminate Ihioma, by sending their hit girl, Abiola , when he was arrested.

However, on his part, Ihioma, admitted to being a member of the Aiye group but denied killing Oyewunmi’s brother. He stated that his members were on a revenge mission on Eiye members that allegedly killed one of their members identified simply as Michael, at Okomola area of Ilasamaja. He said that Sadiq Oyewunmi was the group’s target but that they killed his brother, when they could not get him.

While investigation was ongoing, with a view to rounding up other fleeing members of both confraternities, Mariam Abiola was arrested. On reaching the Ilasamaja division, she identified   Sadiq Oyewunmi as the person who usually gave her pictures and addresses of rival cult members to kill.

Facing Abiola, Sadiq asked “ What is the meaning of Eiye?

In response, she said “ You people did not tell me the meaning “.

Insisting that he did not know Abiola , Sadiq said “  We don’t admit women into our fold. Since she claimed to be a member, she should know what Eiye means”.

How I became a killer

At this point , Abiola bent her head , shook it intermittently. But there was no sign of remorse in her as she raised her head and beamed   with smile, saying, “ So I was only used ?

Narrating how she came in contact with Sadiq , the 20-year-old said, “ I am the second born of my parents. I have always dreamed of being rich right from when I was a child. But it never came to reality as my parents were poor. Today, I am an orphan.

When the burden to cater for my education was too much to bear, I quit my education at SSS 3, from Premier Grammar School, Abeokuta.

“I fled home without telling my siblings where I was going. I came to Lagos to hustle.

While wandering on the streets of Lagos, I came across one Sepe, brother Sadiq (suspected Eiye leader) sibling. I was staying with brother Wasiu. During one of our discussions, brother Sadiq told me he would introduce me  to a job that would fetch me money. He said I needed to blend into the system by being a member of Eiye, first. I agreed and was initiated into Eiye confraternity.

“  He taught me how to shoot. I had training in shooting with him three times, by learning how to aim at a target. By the time I went through training three times, I knew how to fire a shot.

One day, he brought a picture of one man for me to kill. The target lived at Fabiyi street.

“On that fight operation, I was taken to our herbalist who performed an oath of secrecy on me and also fortified me against being caught during operation.

“I was given some concoction that would make me bold. That night I went in the company of three other members of the gang who jumped the fence of the target’s building and opened the gate for me to enter.They led me to the target’s apartment where I met him sleeping on the mat, while some of his family members slept on the couch and   on the bed.”All I did was to fire the target in the chest and forehead, after which I walked away.”Same thing happened with the second, third and fourth targets. Some of the targets were killed at Hassan and Aje streets , all in Ilasamaja. Whenever I was going to kill, I usually wore Jalamia and hijab, so that no one would suspect me, because the mission was usually carried out at night.

“At the end of each mission, Sadiq would give me N10,000, when I returned the gun to him Others got N20,000. He told me that the targets were rival cultists.

After the last killing, brother Sadiq told me that I had become a professional assassin and that I needed to operate on a higher terrain. He said I would no longer be Eiye hit girl, that he would retain me as assassin for some high placed people in the society since election was around the corner and that I would be better paid .

I never felt bad killing people . I believe it is because of the charms given to me by the herbalist. I was not ready to quit because I was told calamity would befall me if I told anyone what I was into.

“ People know me in Ilasamaja but not as a killer because nothing gave me away as one. My friends were usually members of same cult groups”.

Continuing, she said: “ Before I was arrested, I went to look for brother Sadiq on Friday because we had someone to ‘drop’ ( meaning kill ) on Sunday. But on getting to his place, I was told he had been arrested   He gave me a box in which were some weapons, to give to Wasiu who lives on Ogunbowale street. I was returning the box to him since I didn’t see Wasiu, only to be told he had been arrested. I was going to the police station to know why he was arrested since he was not engaged in a fight, only to be arrested.

I am not the only woman in the group. There are more than 20 others, but I don’t know where they live”. Asked how she felt after the arrest, she replied “ as usual, every criminal feels bad when arrested because by then, that influencer would have left him. In my case , I don’t smoke like others do before going for any operation. My influencer is the fortification by the herbalist ( points at him) and I see human beings as flies that can be killed at will”.

Efforts to reach her relatives in Abeokuta to ascertain if her parents were dead as she claimed,   failed as the number given to Crime Guard was switched off.

Commissioner of Police, Lagos State Police Command, Imohimi Edgal , while parading the suspect alongside others, expressed shock that a young girl could commit such crime. He noted that the situation called for the need for parents to show more concern on the type of company their children kept.

In his usual manner of having a chat with suspects before they are charged to court, Edgal advised Abiola and 16 other suspected cultists arrested between Ilasa and Mushin areas within one week, to make up their minds to shun crime , as they face the consequences of their indulgence.

THE ESTABLISHMENT OF A FEDERAL UNIVERSITY OF MEDICAL SCIENCES AND BIO-MEDICAL...

APC: The broom of a broken family.