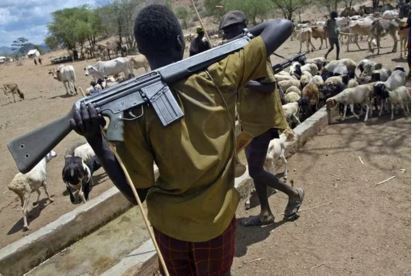 Vanguard learned, yesterday, that Police officers on patrol discovered the wounded victim, an Abakiliki indigene, bleeding helplessly by the roadside and rushed him to the General Hospital, Ibusa.

A source hinted: “The victim, who gave up the ghost while being rushed to a tertiary healthcare centre for intensive care, reportedly narrated that his attackers, who did not understand English, ambushed him, collected his motorcycle and shot him in the abdomen.

“The policemen were on regular patrol, when they saw the 20-year-old victim bleeding helplessly and very weak by the roadside. The first thing they did was to rescue and take him to the hospital.“His killers were not seen; they fled and we heard that they had earlier invaded farmlands in Ibusa with their cattle grazing on farm crops and causing ruins to many farmers, who could not confront them.”

A farmer in Ibusa said: “They invaded my farm with their cattle and destroyed my yam and cassava. “Some farmers, who saw them, ran away for their dear lives. I did not go to farm on that day. It was later I saw what they did to my farms.”

He also called on the Police to rein in a group of young men, who also go about in the community disturbing farmers and community leaders over land ownership, noting that “their activities have become a nuisance to residents.”