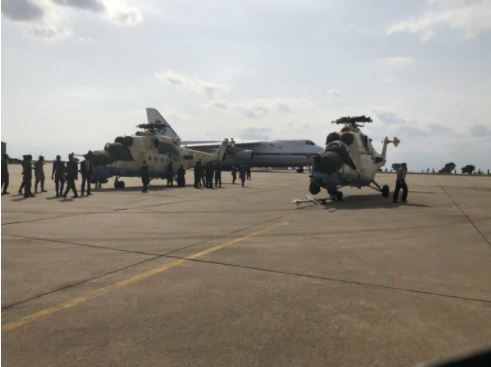 according to a report by newsmen, The Nigeria Air Force (NAF) has taken delivery of two MI-35M combat helicopters as part of its efforts to contribute its quota towards ameliorating the security challenges in the country.
Receiving the aircraft at the flight line of the Tactical Air Command (TAC) of the NAF Base, in Makurdi, on Monday, Chief of Aircraft Engineering, NAF Headquarters, Abuja, AVM Abdulganiyu Olabisi, disclosed that the newly-acquired aircraft would, in a few days time, be assembled and taken to Kaduna where they would be officially inducted as part of the 54th NAF Day celebration.
“We are aware of the prevailing security situation in the country and the effort the federal government is making to ensure that every part of Nigeria is safe and secured. It is part of this concerted effort that the NAF is taking delivery of a second batch of two MI35M Combat helicopters from Russia.
“The helicopters in a few days from now will be assembled. We are happy that we have a team of Russian engineers who are going to assist in the reassembling of these helicopters. Thereafter, they would be taken to Kaduna where they will be officially inducted as part of the 54th NAF Day celebration. Thereafter, the helicopters will be deployed to conflict zones,”
Olabisi expressed optimism that the new addition to the NAf fleets would go a long way in ameliorating the security situation in the country as well as enhance the NAF’s operational capacity.
Reacting to the Benue pogrom, AVM Olabisi described the Benue pogrom as regrettable and worrisome but expressed the hope that the strategic planners in the NAF would have Benue as one of the likes areas where the helicopters would be deployed.
“What is happening in Benue is regrettable and the situation here is of concern to most of us. I believe that the strategic planners also has Benue state as one of the areas where these helicopters are likely to be deployed.”
Also speaking, Director, Public Relations and Information, NAF Headquarters Abuja, AVM Olatokunbo Adesanya said that the MI-35M helicopter is one of the most sophisticated aircrafts in the category of the MI-35 gunships which has a unique feature of night fighting capacity.
Tweet
Pin
Share
0 Shares

DEMOCRACY DAY: I’ll sign ‘Not Too Young To Run’ Bill in...