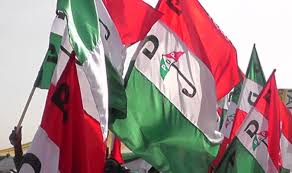 The Edo State chapter of the People’s Democratic Party, PDP couldn’t have wished for a better political atmospheric condition within the ruling All Progressive Congress, APC, than what is currently being experienced in the state as we witness massive implosion with the crisis bedeviling the party goes out of control.

In a state where the PDP left in office about 11 years ago, owing to the appeal court judgement of November 11, 2008 which invalidated the election that brought in the government of Prof. Oseirhemen Osunbor and ushered in that of a former labor leader and now national chairman of the rule APC, Comrade Adams Aliyu Oshiomhole, the PDP looks set to cash in on the irreconcilable differences that currently exist between the national chairman and the state Governor, Mr. Godwin Oshiomhole.

Barely a year after taking over as the Governor in November, 2016, Godwin Obaseki started having issues with the “leaders” of the party in Edo state as many of them were being sidelined in the scheme of things by the Governor.

For the PDP, we have watched in the last one month or so as some leaders in the party had paid visits to the incumbent Governor, commending him for “job well done” so far, urging him to continue.

Though the PDP state exco, through its publicity secretary, Mr. Chris Nosa Nehikhare came out to dissociate itself from the visit of the two elders, Edo state political watchers and pundits have continued to carry out analysis on the situation with many wondering if the PDP has no candidate to fly the party’s flag in the 2020 gubernatorial election.

It becomes irresponsible for anyone to think or say that the party wouldn’t have acceptable or credible candidate to face whoever the APC presents in 2020.

If rumors making the round is anything to consider, one could quickly conclude that the Edo PDP is set to change the narrative.

I have also taken time to put side by side all the possible aspirants of the PDP and I feel strongly that fielding a young and vibrant candidate like Dr. Omoregie Ogbeide-Ihaam would be best bet for the main opposition party.

Granted that the young man who is below fifty years old has just won a second term seat to represent Oredo Federal Constituency in the house of representatives, but one must also say that being a young and new face in the contest, Edo people would have more confidence and trust in him than the rest.

Ogbeide-Ihama whose victory in the last election was a landslide, enjoys massive support among the youths within the three senatorial zones, namely, Edo North, Central and South. His achievements within his first term in the house of representatives is monumental and many believe he possesses the capacity to give the state contemporary and digital governance.

My piece is paying a special attention to Dr. Ogbeide-Ihama because of what was discovered about him, having achieved a lot at the young age of 44, spanning from academic life to professional line, as well as the business world and now in politics.

According to my research and findings, the 44 year old Hon. Ogbeide-Ihama began his studies at Emotan nursery and primary schools in Benin City, Edo State. Thereafter he enrolled at Federal Government College Warri (Unity School) in Warri, Delta state where he obtained the senior school certificate in 1993.

He proceeded to the University of Benin, where he studied and graduated with a Bachelor Degree in Civil Engineering bagging a Second Class Honours (Upper Division) in 1999. In 2009, he obtained an MBA in Oil and Gas Management from the Robert Gordon Un
Hon. Ogbeide-Ihama began his career at Lenbrook Solar Systems in Lagos, where he successfully executed solar powered water projects within Nigeria. Omoregie had his compulsory N.Y.S.C program in Port Harcourt, Rivers State where he served and worked with Exxon Mobil as a Drilling Engineer.

There he gained tremendous experience in the Oil and Gas sector before venturing into private business.

He set up a very successful company, Foluke Global Resources Ltd, a company named after his dear mum Foluke, with operations covering civil works, supply and installation of solar equipment.

As a young entrepreneur, who saw that balancing a demanding workload with achieving competitive advantage in the business world today was indeed challenging, and as a man in constant need to broaden his horizons by acquiring knowledge, Omoregie took up a Master’s program at the Robert Gordon University Aberdeen, Scotland where he obtained an MBA Degree in Oil and Gas Management. He got back into the Oil and Gas industry and his stellar academic record and dogged pursuit of excellence saw him appointed then as the In-Country Manager of Score Energy Services Nigeria Limited, an arm of Score Group Worldwide. He was also a Director at FGR Energy which has its main focus on Gas Turbine Solutions.

In 2015. Hon Omoregie was elected under the platform of the People’s Democratic Party (PDP) to represent Oredo Federal Constituency at the Federal House of Representatives, Abuja. His legislative interest include youth and women empowerment, power generation and proper management of national resources. He serves as Chairman of House Committee on Culture and Tourism.

He is a member of the committees such as; Environment and Habitat Committee; Ports, Harbor and Waterways; Power; Basic Education; Housing; Capital Market; and Public Petition.

Hon. Omoregie is a member of several international and local bodies including the Chartered Management Institute, United Kingdom (CMI), Association of MBA’s (AMBA), Rotary Club International, and the Nigerian Society of Engineers (NSE).

With all these achievements and experience at his young age, it is suicidal for the ruling APC to remain complacent despite the avalenge of crisis that have torn the party into shreds with factions coming out of different interest groups within the party daily.