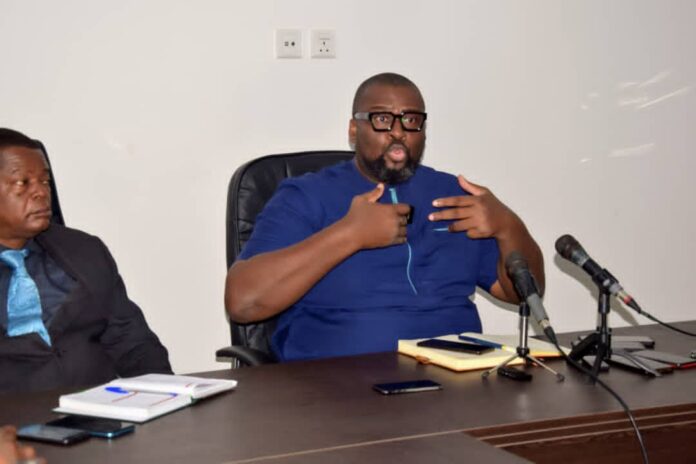 Edo State Commissioner for Communication and Orientation, Mr. Chris Osa Nehikhare, said that the state government had enough fire combating trucks to handle any fire outbreak in the state.

Nehikhare, who stated this while speaking with journalists on the Tuesday night fire outbreak at a shopping mall on Lagos Street, Benin City, urged residents to always allow fire fighting officers to always do their job whenever there was a fire incident.

The Commissioner lamented that had the hoodlums, who invaded the scene of Tuesday’s fire outbreak allowed the fire officers access to the scene, a lot of the property destroyed in the inferno would have been salvaged.

Nehikhare disclosed that there is at least a platoon of the Federal Fire Service domiciled in Edo state to support our Fire Service. Early this year, he continued, NPDC donated a fire truck and Edo State government made additional purchases of two INNOSON fire trucks of which one has been delivered. “We have equally sent our firefighters on training on modern fire fighting and safety practices as well as equipping it’s personnel.

The unfortunate problem are some members of the public, who usually crowd around fire scenes and prevent the fire officers from gaining access to the scenes.

“We, therefore, want to appeal to members of the public, especially the youths, not to allow themselves to be used to prevent professional firefighters from doing their job whenever there is a fire outbreak”, Nehikhare pleaded.

While condemning the act of looting during fire incidents, Nehikhare said such an act “is not just wicked, but totally ungodly that anyone would want to benefit from the misfortune of fellow human beings.” He decried the lack of empathy exhibited by some people.

On the rebuilding of the markets that got burnt in the past, he explained that the designs for the markets were ready and would be implemented according to the new city master plan.

“We already have the designs for the markets that got burnt in the past. The intention of the government is to make the markets to be in conformity with modern standards and design as well as meet needs of a modern city. This will be implemented shortly”, Nehikhare assured.

The commissioner, who expressed worries over the nature of fire outbreaks in markets in the state, especially during electioneering, cautioned that the state government would not leave any stone unturned to get at the roots of such incidents and prosecute those found to be behind such dastardly acts.

Uefa and Fifa’s hypocrisy is astonishing – their greed ruined this...