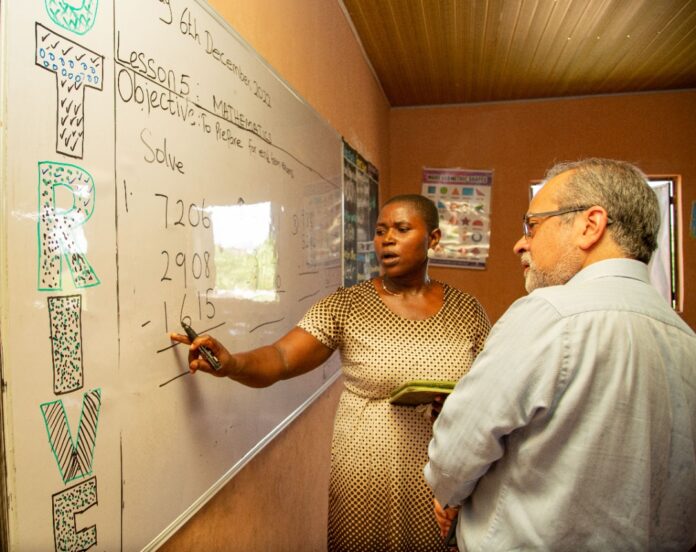 Edo state has been commended for its giant strides in revamping the Educational sector from the basic to tertiary level through wide reaching reforms instituted by Governor Godwin Obaseki.

The commendation was made when a delegation of international agencies came to Edo state to visit rural schools in order to assess the impact of EdoBEST on Foundational Literacy and Numeracy. At Okpon Primary School, the delegation interacted extensively with teachers, pupils and community elders. When asked their greatest need, the pupils and community elders said perimeter fencing for the school. The delegation noted that what is being taught at the rural school is the same as what obtains in schools in Benin city, the state capital.

According to extant study, 90% of children in Sub-saharan Africa and South Asia cannot read and comprehend before the age of 10. Edo State is the only sub-national government in Africa to be recognised as an “Accelerator” by the World Bank and UNICEF. Accelerator are countries making discernible progress in literacy and numeracy. The Accelerator program focuses on improving literacy and numeracy in early grades in order to eradicate learning poverty.

According to the Edo State Commissioner of Education, Dr. Joan Osa Oviawe, “the vision of Governor Obaseki to reform education in Edo state is paying off.” We have worked hard since the launch of EdoBEST on April 19, 2018 and now
our reform has evolved to EdoBEST 2.0, a sector-wide reform framework that goes from basic to tertiary. At the basic level, we are leveraging on gains made in the last four years to continue to close the learning gap. At the secondary level, we have just begun reform of our school system, strengthening school level leadership, introduced digital learning, professional development for all teachers as well as setup School Management Board for every secondary school. At the Technical and Vocational Education level, we have identified 17 industries that we will train our students for, from Oil and Gas, Energy, Textile, Computer craft, to the Hospitality and Service Industries. Governor Obaseki has announced the establishment of 20 new TVET Schools. Our reforms at the tertiary education level focus on Relevancy, Quality and Access. In the area of access, our new multi-campus system will ensure that there is a state-owned tertiary institution in all the 18 Local Government Areas of Edo State.

From the Ministry of Education to the Basic Education Board (SUBEB); Secondary Education Board (SSEB), the Board of Technical, Vocational Education and Training (BTVET) and the Directorate of Higher Education, we are poised to deliver quality education for the Edo child.