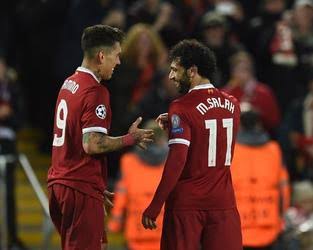 Post Views: 647
Although the 32-year-old acknowledged the impressive form of the duo, he is looking to ensure they ‘don’t have one of their inspired days’ in Kiev

Ahead of Real Madrid’s clash with Liverpool in the final of the Champions League encounter on Saturday, Sergio Ramos has explained how they intend to stop Mohamed Salah and Roberto Firmino.

Salah has been in an imperious form all through the season, scoring 44 goals in 51 appearances in his debut campaign with the Anfield outfit.

The Egypt international has forged a good partnership with Firmino and Sadio Mane with the three contributing a huge chunk of the goals scored by Jurgen Klopp’s side this season.

The Brazil forward has notched 27 goals across all competitions this season, including 11 in the competition.

And Ramos, who is hoping the Spanish giants lift their third consecutive Champions League trophy, has hinted on how they plan stopping the deadly duo. 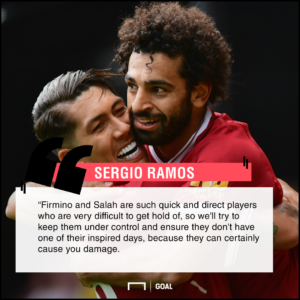 “[Liverpool are] very good technically and are full of pace, but we’ll try to hurt them with our players who have similar attributes.

“We know we can also cause them problems on the counter. We’ll try to take advantage of that and we also know we are a threat from set pieces.”