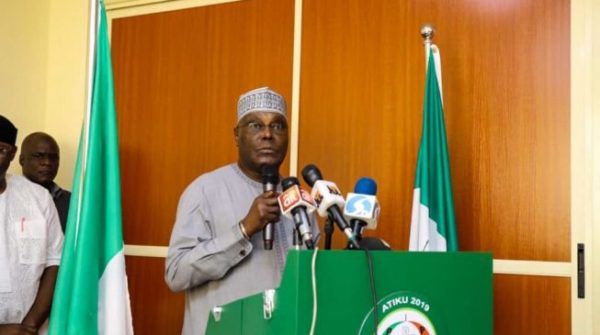 The Peoples Democratic Party, PDP, Presidential candidate, Alhaji Atiku Abubakar, has spoken that the trending leaked audio recordings alleging to be the voice of the Minister of Transportation and DG of President Muhammadu Buhari Campaign Organization, Rotimi Amaechi, has now confirmed that reelecting Buhari for a second term means starvation and poverty to Nigerians.

Mr Atiku also speaking said that the recording has revealed the Transport Minister Mr Amaechi confirming that Nigeria “was beyond redemption as the country was yet to find a leader that can confront the enormous challenges she is facing.”

The statement and audio recordings which were made available to journalists in Abuja by Mr. Phrank Shaibu, Special Assistant on Public Communication to Atiku Abubakar, disclosed the minister complaining about working in President Buhari’s cabinet.

Atiku quoted Amaechi as saying, “This country can never change, I swear. The only way this country can change is in a situation where everybody is killed.

This country is going nowhere. When Magnus (Abe) was my Secretary to the Rivers State Government (SSG), I told him that this country is hopeless and helpless and he told me, Oga, stop it. This cannot be coming from a governor.

“But two months in Abuja, Magnus came to meet me and said, I agree with you; this country is hopeless and helpless. All they do in Abuja is to share money.”

Atiku’s statement partly reads thus: “In apparent show of disbelief in the policies and programmes of the Muhammadu Buhari led All Progressives Congress (APC) administration, the minister complained about the President’s penchant not to heed constructive advice and the fact that he does not read.

Amaechi said ‘the president does not listen to anybody. He doesn’t care. You can write what you want to write. Does he read? I was flying with him in the aircraft and we saw a news report where a goat seller was complaining that he couldn’t sell his goats during Sallah because of Buhari’s administration. And the president said what my business with goat sellers is?’

“Amaechi also said no President, in the history of Nigeria, has championed ethnicity and other primordial sentiments as President Buhari has done since assuming office about three and a half years ago.

“He said, aside other nepotistic tendencies that have become the hallmark of the administration, the president has instructed that the Transportation University being planned by the ministry be situated in his home town, Daura, Katsina State.

“Amaechi warned journalists present at the interaction that the information he was divulging to them was not for public consumption.”

Atiku went further to quote Amaechi as saying, “These are not things you publish. If you publish it, you will never sit with me again. I have already written to the Governor of Katsina State and I don’t know why he has not replied to give us the land in Daura for the project (Transport University). That’s for the University in Daura. The next university would be in my village. There is a popular saying while we were growing up, that charity begins at home. But mine began abroad!”

Also, Shaibu, in a terse press statement, said “the President should just quit honorably instead of wasting tax payers monies on a failed reelection bid.”

“These recent audio tapes contradict claims yesterday by the Nigerian Presidency through Mr Tolu Ogunlesi, the Special Assistant On Digital Communication that the audio was recorded in 2014.

“Truth is, the President has established a record of failures which probably no other President would ever equal or erase. Mrs Aishat Buhari was partially correct when she stated that two people are preventing her husband from performing well. With this audio tape, if the two don’t include her husband then she is not completely being truthful.”