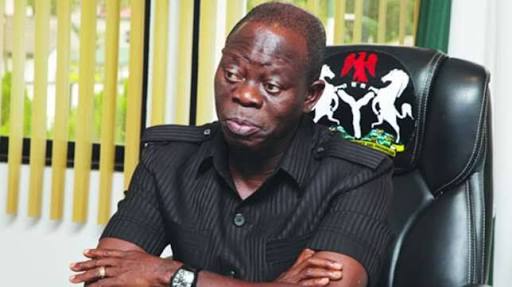 Addressing a press conference on Sunday in Benin City, Bishop (Dr) Osadolor Ochei JP, said he has 86 EXHIBITS and has filed action against the former governor at the Federal high court sitting in Abuja.

The case with suit Number FHC/ABJ/CS/628/2018 has the EFCC and Adams Oshiomhole as first and second respondents.

The lawsuit is at the instance of EFCC’s refusal to attend to a well detailed Petition of the Applicant (Bishop Osadolor) to the 1st Respondent dated 28th October, 2016, bothering on economic and financial crimes against the immediate past governor of Edo State, Comrade Adams Oshiomhole.

In a Motion Ex-Parte, the applicant Bishop Ochei is praying the court to as a matter of urgency compel the EFCC to commence the investigation and prosecution of the former governor in pursuant to Sections 6(b) & (h) and 13(2) of the EFCC Act, 2004.

The Applicant in his suit said he has complained to the 1st Respondent (EFCC) about allegations of corrupt practices as well as economic and financial crimes against the 2nd Respondent (Oshiomhole), on a number of occasions, without eliciting any response or interest from the 1st Respondent in this regard.

Bishop Ochei, said that the 1st Respondent owes Nigeria and Edo State a duty to uncover the truth by meticulously investigating these allegations to ascertain the extent of complicity and culpability of the 2nd Respondent with respect to the allegations levelled against him.

THANK YOU: WHY WE FINISHED STRONG- Dan Orbih