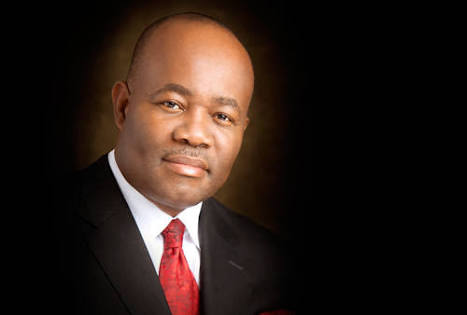 It is tempting for APC and it’s Chairman ( of the Senate blockade fame) to get very excited about AKPABIO’s defection. The matter is much more than  gathering crowd across the south-south geo political zone at Ikot Ekpene. Let’s give you a few tips;

Many think that Akpabio only defected in other to protect himself from prosecution by EFCC for embezzling over 200 Billion Naira of public funds. That is only one of the reasons for defection. Even that is forlorn hope. As soon as the 2019 elections are over, the appropriate pressure would be brought to bear on EFCC to prosecute Akpabio and he would be duly prosecuted. No elected Governor in history has pilfered the kind of money that Akpabio carted away from the coffers of Akwa Ibom State. He should find out from Sen. Dariye and former Gov. Jolly Nyame whether defection to APC saved them from prison cells. Let Akpabio ask Orji Uzor Kalu whether or not a  court of law ruled that he has a criminal case to answer and granted an interim order of forfeiture against most of his allegedly ill-gotten assets.

Akpabio has forgotten how Obong Victor Attah tried to give the PDP governorship ticket to his son in law and how the people of Akwa Ibom resisted it. In the end, Akpabio was nominated as PDP Governorship candidate in 2007 and became Governor.

After Emmanuel Udom became Governor in 2019, he remained fiercely loyal to Akpabio and allowed him to nominate persons for the posts of the SSG, several commissioners and a host of other Government offices in the state. Nobody enjoyed such benefit from Akpabio. The greed of Akpabio remained uncommon. Despite the huge debt he drove the State into and the frequent harassment suffered by the State in the hands of EFCC on account of Akpabio’s plundering of the resources of the State, Gov. Emmanuel stood by Akpabio in the spirit of the Governor’s name- EMMANUEL.

Akpabio became restless. He took control of the entire Party apparatus and singularly decided who got what, when and how, in the State. He did this  without any regards for the Governor on most occasions.

As Akpabio got consumed in his greed, he demanded that the Governor should consult him before submitting Annual Budget Estimates to the State  House of Assembly. He added another request. This time, he wanted the Governor to get his approval before expending State funds on any project whatsoever. Indeed, he was bent on running the government on behalf of the Governor. This was was the point of departure. Why on earth did Akpabio think that he would  run the government for an urbane intellectual elite and technocrat like Udom Emmanuel ? How would Emmanuel defend that before the people of Akwa Ibom State who voted him into office? As expected, Udom politely refused. Akpabio began to nag. He wanted more of the public funds of the State in addition to the embezzled funds for which he is under EFFC Investigations.

Wait for this. It would shock you. Akpabio then told Udom to commit to making his wife who is from one of the Ibo States, Deputy Governor in 2019. Udom flatly turned this down. Akpabio grew more red.

When Akpabio could not get Udom to surrender the purse of the State to him and secure Udom’s commitment to make his wife Deputy Governor in 2019, he began to woo APC. He knew that the APC led Government had a penchant for promising  forgiveness to economic sinners who repent by joining the party. He decided to gamble it. He became a mole in PDP, even as Senate Minority Leader. He leaked out the outcome of PDP caucus meetings to APC members and promised to help them realize the removal of Saraki as Senate President.

A new darling had been secured in the Senate by the ruling party. Such was Akpabio’s infidelity when words filtered out that he had completed arrangements to defect to APC. Nobody was surprised when Akpabio told PDP Senate caucus members that he was off to Germany on a private trip, only to emerge in London prostrating like a recently pardoned convict before President Buhari.

Back in Akwa Ibom, it would not be easy for Akpabio to claim the Government House from Udom. The Governor is an Ibibio man. They control 12 out of the 21 LGA’s in the State. Out of Akpabio’s Senatorial district comprising 8 LGA’s, 2 belong to Ibibios who constitute the majority tribe in the State. Not only is Udom working, he is very civilized and laying durable development plan  for the State. The Ibibios are happy with him. The Eket  people are enjoying his tenure. So are other component tribes that make up the State. How Akpabio hopes to reverse these gains in 2019 elections for his selfish interest is a matter for conjecture.

In any case, the likes of Obong Victor Attah, Chief Don Etiebet, Akpan Udoedohe , Nsima and others were frustrated out of PDP by Akpabio. He was ruthless to them and their supporters. They were reduced to political- lightweight through complete exclusion from political participation and crass violence against their persons. Now Akpabio would be their new leader in APC and would imagine that they would surrender to his leadership. This would be some sort of dangerous optimism.

Having resigned as Minority Leader of the Senate, what would qualify Akpabio as the leader of these eminent politicians? Would APC and the leaders of the party in Akwa Ibom State accept Akpabio’s wife as Deputy Governorship candidate of their party in 2019. Plenty of trouble ahead as it is not yet Uhuru for APC in Akwa Ibom State.

Cattle Ranching in Botswana Versus Cattle Grazing in Nigeria.

You are still under suspension,Ize-Iyamu cautions Oshiomhole