Home News You are still under suspension,Ize-Iyamu cautions Oshiomhole 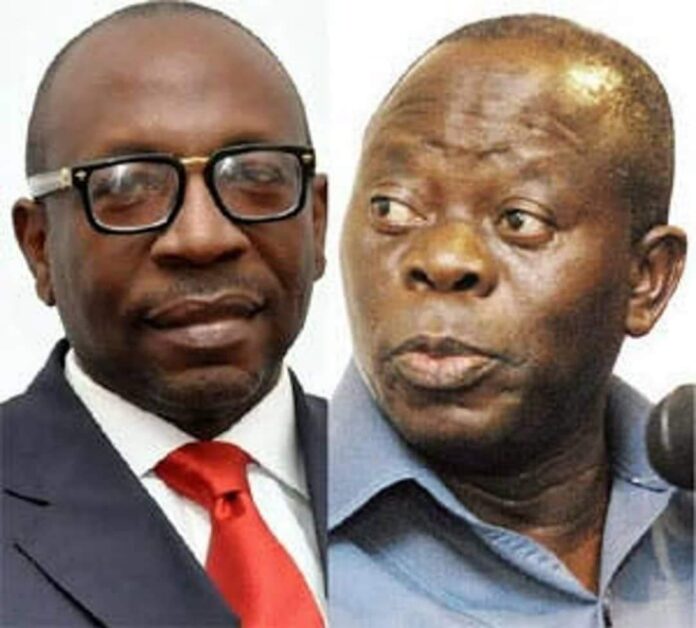 Following the statement credited to Oshiomhole yesterday where he was quoted as saying the current revalidation exercise of the party is a joke and unconstitutional, Ize-Iyamu who is now the leader of the APC in Edo state, has cautioned Oshiomhole to speak less as his suspension is yet to be lifted by his ward.

Oshiomhole who is understandably unhappy about the hijack of APC in Edo state by Ize-Iyamu, lambasted the whole exercise and even went ahed to say the exercise will fall in the face of legal scrutiny. “There is nothing in the APC constitution that says a member shall revalidate or renew its membership. Once you registered when you joined the party and you have not decamped, you are a member. So, revalidation is strange to our constitution. “I have only done this because I want peace to reign but in doing this, we have to be careful not to create constitutional breach.”

He noted that between 2015 and now, people have exited the party and others have joined while some have died, adding that it makes sense to review the register so that those who have decamped to APC will be registered while those who have left would be deleted. “If you ask me, as a foundation member, who has never decamped, to revalidate my membership, it is double registration because there is nothing like revalidation in our constitution”

However, Ize-Iyamu, desperate to please his Abuja overlords, fired back quietly in a telephone conversation with the press by cautioning the disgraced national chairman to focus on lifting his suspension at his ward 10 in Iyamoh as the suspension is still binding. The war brewing between Ize-Iyamu and Oshiomhole is yet to be fully understood but sources say he is unhappy with the way Ize-Iyamu is cozying up to the cabal that allegedly removed him from office.