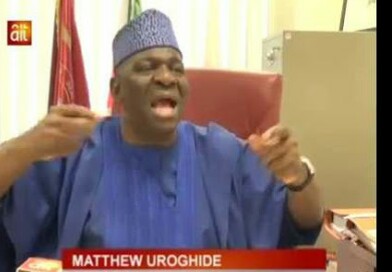 Is it true that the Benins pay their best hands with a bad coin? Is it true that instead of appreciating a good son for his best efforts, the Benins look for excuses to bring him down? Is it true that it is when you have performed to the delight of all and to popular acclaim, that you are not given the chance to perform again if you are one of their own? Definitely, this cannot be true of us though not a few have said it to my hearing that this is the character of the Benin people.

I would say the perception is in breach of whom we ought to be otherwise our ancestors would not have laid down the Odolevbo Creed: “Aigbe odolevbo” which means, “The builder of the community is not brought down”. Howbeit my patriotism and nationalism, the 2019 Edo South Senatorial Election provides a litmus test for the creed, as we have got a proven quintessential odolevbo on our hand in the person Senator Matthew Aisagbonriodion Urhoghide. Urhoghide is seeking a consecutive reelection to the Senate to continue his representation of Edo South.

Since 1999 when the present democratic order came into being, Edo South has had four senators, namely: Roland Owie (1999 – 2003); Daisy Danjuma (2003 – 2007); Ehigie Uzamere (2007 – 2015); Matthew Urhoghide (2015 – 2019). Only Senator Ehigie Uzamere has done two consecutive terms of 8 years. The others have been one-term senators. They have all been members of the Peoples Democratic Party, PDP, with the exception of Uzamere who has been in both PDP and APC of which he had secured their respective senatorial tickets.

With due respect to the other distinguished senators, one thing stands Urhoghide out – his performance in every aspect has been simply exceptionally unprecedented. That is to say, that he has been superlatively excellent. He has given a sublime definition to the role of a Senator, by his profound impact on Edo South people, whether by way of parliamentary dynamism or execution of constituency projects. Even almost with a year left of his four-year mandate, the verdict on Urhoghide’s performance is that he is the best with distinction.

Senator Urhoghide’s performance at the National Assembly has been nothing but stellar. Despite being a first time senator, he has been able to work his way around the intricate web of competitive engagements and has ensured that Edo South is excellently represented. He has not been found among the absentee or sleeping senators. As chairman of Senate Committee on Culture and Senate Committee on Public Accounts, respectively, he has performed so well such that his understanding and articulation of his roles have brought him admiration, envy and a measure of animosity. Nevertheless, he has gracefully with the confidence of the quintessential Edo man forged on gallantly. Urhoghide has shown such mettle that without doubt, a return to the Senate would make him a greater asset to Edo South and Nigeria.

Urhoghide’s unprecedented propensity for attracting and executing constituency infrastructure and human capital projects has made his admirers to confer upon him the fond sobriquet “Executive Senator”. Not a few people are of the opinion that Urhoghide’s projects challenge the competence of Edo State Government in the provision of public utilities, particularly within Benin City and Edo South in general. In quantity and quality, Urhoghide has made sure that Edo South got more than its fair share of the constituency projects allocation of the National Assembly. He has in so many instances, gone the extra mile, at great personal inconvenience to get things done on behalf of his beloved Edo South.

In the area of human capital development, Urhoghide has seemingly established a regular bazaar of skills acquisition and scholarship awards. He has also been unrelenting in getting competitive federal government jobs for qualified Edo South people, including indigenes and non-indigenes. To many Benin people conversant with the “Egiaru Syndrome” that has seemingly been the curse of majority of our privileged elected and appointed government officials, Urhoghide appears like a divine freak of nature. He has raised hope in the disillusioned youth of the Great Benin Kingdom that messiahs can come out of us.

In spite of the copious evidence of Urhoghide’s landmark, our Constitution prescribes that he must go to the people again for a renewal of his mandate. Once again, the people hold the power to send him back to continue the good work he has been doing, with the prospect of yet greater things to come from his representation. Nonetheless his heroic achievements, he is bound to face opposition even from those that know that they have a daunting task of beating him in a fair and free election where the people would be fair and reasonable. However, we live in desperate times when the senses of men are bought over with all kinds of gifts and sentiments and our legendary penchant for spurning the proven good gets the better of us.

However, the Benin people cannot afford to sacrifice their best. It is time to appreciate the quintessential odolevbo and send him back to continue his good works. For a fact, we have got our champion in Urhoghide by whom we are assured of more spoils of war. Senator Matthew Urhoghide, as a builder, has shown steady hands and a quick mind that can get us the progress structure we desire and deserve.

It is for our continued growth along the enviable trajectory that he has taken us in the last three years, that we must put aside all vain sentiments and partisanship to stand by the ODOLEVBO N’EMWEN OGIEVA – SENATOR MATTHEW AISAGBONRIODION URHOGHIDE. It should not just be about voting but voting well and standing to defend that vote against desperate agents whose only agenda is to get power for the sake of power and not power for the sake of the people, which Urhoghide’s representation epitomizes.

THE MONOPOLY OF EVIL.