Home Entertainment The Oba Debacle- a thumb at society 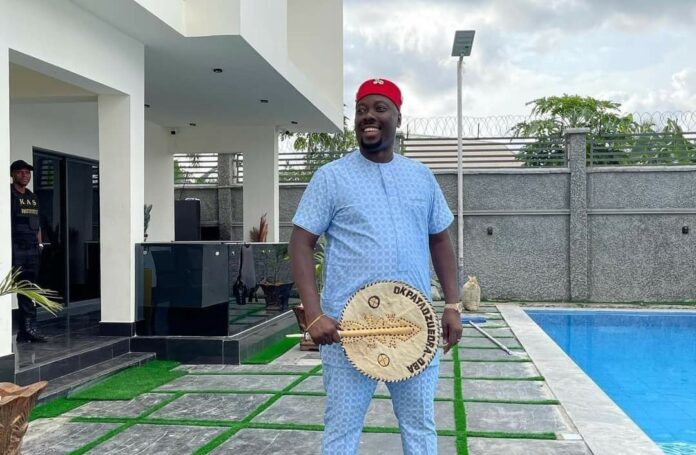 So for the last few days, we have been regaled by an almost obscene and vulgar outpouring of wealth in Oba a sleepy hamlet in Anambra State.

One if its sons in burying his mother opened the doors of opulence,daring carpetbaggers all over the country to fly in and show their might.

They have answered with all eagerness.
His pull is phenomenal as the barely literate army of new wealth stormed his mothers burial determined to out class each other in a disgraceful but exciting display of naked wealth.

The event has thrown Oba into our counsciousness. The little town has made Cannes the billionnaire paradise in the South of France green with envy.

They all appeared. In their ill-fitting clothes, loud and naked jewelry and their women who all look like porcelain dummies regalling themselves with the sweet songs that make me love the igbo culture.

The kidnappers and other men of the underworld have called a truce for the period. They have either joined the hordes of poor people who line the roads to see the spectacle or joined the party as friends and colleagues in this macabre dance of the absurd.

Hordes of currency from all parts of the world except maybe the Zimbabwean Dollar were being hurled at over painted mistresses, beautiful songs serenading them as they do this and the sweet and lovely igbo culture that i so much love in full display.

Even the marauding Fulani Herdsmen took a break as they sold out cattle used for huge barbecues. They called on their brothers in farway Futa Jallon to beef up supply as the Chief Priest of Cubana and his friends eroded local supply.

I loved especially the hailings. As handsome actor Akex Ekubo serandes legendary Actor Kanayo Kanayo calling him ‘something sacrifice’. I loved it.

Then the one they call E- Money stands up to greet the celebrant and the beautiful staff of office goes up in the air in a wonderful salute to the igbo culture.

What is Oba to me. Oba for me is bullshit to a snubbish mainstream society that didn’t give these ones a chance.

They were not educated by the taxes their parents paid. They were not given the opportunities mainstreem could give their own children.

They were not born with any silverspoon and didnt even see any kind of spoon in their youth.

These are laggards, the ones society left to die. They didnt die.

Untamed by education and civilized mannerisms, they unleash a salvo of wanton debauchery on society in a humiliating blow to their arrogant nostrils.

Shebi you didnt send me to school, shebi you thought cholera will kill me, shebi you watched me slave at the Ariaria market expecting poverty to decimate me.

Look at what i have become today. I am Cubana, i am E- Money, I am K-Cee, I am Eze Ego and to hell with your civilization. I will buy you and your wife. Sleep with her and give her a pension for the rest of your lives.

This is what i have seen in Oba. A rich rebellion against the orderliness that sane society predicts.

A madness by a tribe of journey men who pretend to play the Robin Hood script,doling out a pittance of their wealth and reserving a huge pile for their continued search for hedonistic pleasure.

Assuming all this wealth we have seen remains legitimately sourced and up till the time of writing, there has been nothing to prove otherwise, this can be termed as a loud , obnoxious rebellion by a tribe of savages who refuse to be tamed by the sophistication of educated mores but would rather show off in a bid to achieve what will forever elude them – acceptance by mainstream elitist society.

Welldone Cubana in your nakedness, you have proven a point- Education is still king.