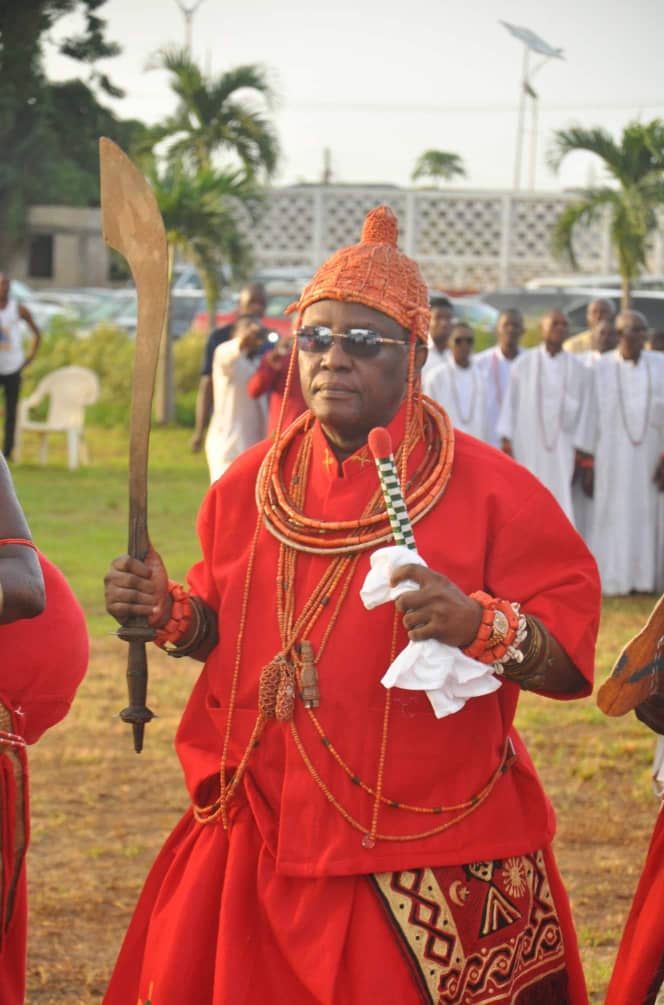 By Desmond Agbama, CPS to Oba of Benin

The sixth day witnessed the highpoint of the ceremony with Oba Ewuare II taking part in the traditional dance with the seven Masquerades, along with Chiefs Osa and Osuan.

The ceremony which usually span 14 days is used to commemorate the return of Oranmiyan, the son of Ododua to Benin Kingdom, and the beginning of the Obaship Era in the Kingdom.

The 2019 edition of Ugie Ododua celebrated by His Royal Majesty, Ewuare II, Oba of Benin attracted people especially lovers of the very rich Benin culture and tradition to the Palace of Oba of Benin, while members of the Royal family, Chiefs, Women, Youths and other guests were in attendance.

The Ugie Ododua is celebrated at the instance of OmoN’ObaN’Edo, UkuAkpolokpolo to offer prayers for God and the ancestors to bless, and protect the Oba, members of the Royal family, Chiefs and the entire people in the Kingdom.

How is the Ugie Ododua performed? Once the Oba is on the throne at the UghaEhengbuda in the Oba Palace, the Seven Ododua Masquerades come out in a single file from Ugha-Erhoba accompanied by members of the Iwebo Palace Society, Chiefs Osague, Osa and Osuan of Benin. The seven masquerades are led by the one carrying the “Ukhure” and each of the masquerades take their turn to pay homage to the OmoN’Oba in a very peculiar way. This is followed by Chiefs Osa and Usuan of Benin as well as Chief Osague.

After the initial homage, the seven masquerades in a single line begin to dance in a very special and unique way before the Oba to the drumbeat and songs by the Ogbelaka Group. Whenever the Seven Masquerades dance close to the Oba on the throne, they pay obeisance to OmoN’Oba in a unique way. This dance is repeated seven times.

After the seventh time, the seven masquerades led by the one holding Ukhure again come out to offer prayer for OmoN’Oba, members of the royal family, and the people of Benin Kingdom. Chiefs Osa, Osuan and Osague also took their turn to also pray for the Oba of Benin, thereafter, the seven masquerades retire to Ugha-Erhoba in the Palace.

Meanwhile, throughout the event, it is only the Ogbelaka Group that beat the drum, shake the maracas and sing different songs that the Seven Masquerades dance to. It is a very unique song by the Ogbelaka and a unique dance step by the seven masquerades.

On the sixth day His Royal Majesty OmoN’ObaN’EdoUkuAkpolokpolo, Ewuare II, Oba of Benin joined Chiefs Osa and Osuan to dance with the seven Ododua Masquerades to the admiration of everyone present.

Speaking, Chief AimuanmwosaOsuan, the Osuan of Benin Kingdom traced the history of Ugie Ododua to the period of Oba Eweka I, and it is used to thank God and the ancestors for the successful ascension to the throne by the Oba. According to Osuan of Benin, the ceremony is also used to commemorate the successful return of Oranmiyan the son of Ododua to Benin Kingdom, as well as the return to Obaship era, after a period of interregnum.

Chief Johnson Usen, the Osa of Benin Kingdom who spoke on the significance of Ugie Ododua said it is one of the sacred and spiritual performances by Osa and Osuan for the Oba of Benin, hence it is commonly said that “OsavbeOsuanorenemwinnore omen”.

The Osa of Benin Kingdom explained that Ugie Ododua means many things, but importantly, it is used to purify and sanctify the Kingdom so that evils and problems will cease in Benin Kingdom in particular and Nigeria in general. Chief Usen said Ugie Ododua is also used to pray for the well-being, good health, protection and abundant blessings for the Oba, members of the Royal family, Chiefs and people of Benin Kingdom and indeed Nigerians.

The costumes and other paraphernalia used during Ugie Ododua are kept by the Iwebo Palace society, while the drum beat is performed by the Ogbelaka Group. The ceremony can only be performed on the request of His Royal Majesty, and it is usually presided over by the Oba of Benin.

The Crown Prince Ezelekhae Ewuare, Iloi(Queens), members of the Royal Family, Chiefs, Igie-Ohen, Edionwere, Market women, Youths and other guests were present at the ceremony.