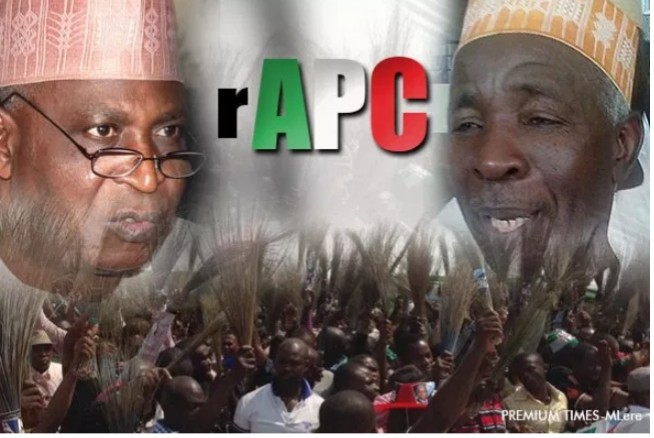 A faction of the ruling All Progressives Congress, believed to be backed by senior government officials pushing to challenge President Muhammadu Buhari in 2019, has announced the formation of a new party bloc.

The group said it is now the “Reformed APC”, and the “authentic” faction of the party.

The press conference was addressed by Buba Galadinma, a former secretary of the Congress for Progressive Change (CPC), Mr Buhari’s former party; and a former minister and nPDP leader, Kawu Baraje.

Mr Galadinma said the group took the decision because APC had disappointed Nigerians especially in not being able to tackle continuing killings across the country.

He also said the party’s recent national congress was not democratically conducted, and accused the Buhari administration of “inconsistent” anti-corruption campaign.

“The Reformed All Progressive Congress, RAPC, national executive committee is constituted. We are assembled to address you on the state of our party, APC, the state of the nation and above all the constitutional democracy of Nigeria. I am standing here before you as the chairman of RAPC. You will recall that in 2015 general election some political parties came together to form a brand new political party called APC. This merger was based on the strong belief that Nigeria had come of age that it was severely under-performing and incapable to meet the potentials of good governance,” Mr Galadinma said.

“The Nigerian people gave power to APC based on its promises and potentials. We are sad to inform that after more than three years of governance, our expectations (have been) completely dashed. The APC has run a ruthless and incompetent government that has failed to deliver good governance to the people. It has rather imposed dictatorship, impunity, abuse of power, complete application of constitutional and statutory responsibilities, impunity in the rule of law and constitutionality. It has failed to ensure the security and welfare of Nigerian and elevated nepotism to secondary height.”

PREMIUM TIMES reported earlier that plans were afoot by former new PDP bloc of the APC to announce their exit from the mainstream of the party in preparation to joining the Peoples Democratic Party (PDP).

Arrowheads of the nPDP include Senate President Bukola Saraki and Speaker of the House of Representatives Yakubu Dogara, and a former governor of Kano State, Rabiu Kwankwaso.

Multiple sources had told PREMIUM TIMES that the faction would address a press conference later on Wednesday to announce the decision.

Messrs. Saraki, Dogara and Kwankwaso did not attend the news conference.

The announcement of the formation of the “Reformed APC” is said to be the first step in what would lead to a coalition of political parties and interests, to challenge Mr Buhari.

The faction, comprising some former governors and ranking lawmakers, has been in a tug of war with the APC government.

Some of the nPDP members, including Mr Saraki, former Adamawa governor, Murtala Nyako, and a senator, Dino Melaye, are facing corruption and other charges.

A number of the faction’s chieftains also complained about being left in the cold during the party’s congresses that took place between May and June this year.

Four governors and other ranking PDP members, including Mr Saraki, jettisoned the party in the run off to the 2015 polls, shoving up the chances of the then opposition APC.

But since forming the new government, many fault-lines started emerging, with the elements from the PDP bloc complaining of marginalisation.

A source had told PREMIUM TIMES that the press conference today would herald merger of various blocs ahead of the election.

“There have been discussions and a memorandum of understanding drafted among the interest blocs that would take care of everyone’s interest going into the PDP,” the source said.

According to the source, those going into the new alliance include the Social Democratic Party (SDP) and the African Democratic Congress (ADC), believed to be backed by former President Olusegun Obasanjo.