Home News Nigerians scammed a Kansas man out of $110K. This is how he... 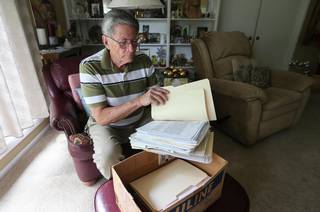 A decade ago, Fred Haines was wandering the Wichita airport looking for a Nigerian man hauling two chests full of cash.

After an hour of waiting and asking around, he finally came to the realization that the $65 million Nigerian fortune he thought he was inheriting was not coming after all.

What is now coming, though, is the $110,000 he had been scammed out of, thanks to the work of the Kansas attorney general’s office.

From 2005 to 2008, swindlers hoodwinked Haines, a self-employed handyman in Wichita into spending thousands in pursuit of an imaginary inheritance from a Nigerian government official — a con known as the Nigerian Prince Scam. Haines re-mortgaged his house three times in the process.

The problem, however, is no comprehensive list of victims existed.

All victims who’d sent money to hucksters using the service were able to request refunds, but only those who had complained to law enforcement or Western Union were notified directly of the settlement.

Like in other states, Schmidt’s office sent news releases out about the settlement, asking victims to contact the agencies. But he worried that not enough people would know, so his office took an extra step.

Schmidt’s office asked for a list from Western Union of all Kansans who’d sent large sums of money, or smaller sums to certain high-risk countries. They then sent more than 25,000 letters to everyone on that list to offer help in claiming refunds.

“It was an imperfect system, but it was the best we were able to come up with to try to identify people who otherwise never would’ve been identified,” Schmidt said.

Ironically, because many victims fell for scams of unsolicited offers of money, people were skeptical of the letters, Schmidt said. Some were even angry when employees called to follow up on those who hadn’t responded.

But this time it was for real.

Fred Haines is a self-employed handyman in Wichita.
When Haines, 77, first read his letter about the settlement, he felt cautiously optimistic.

A lifetime habit of careful organization came to his rescue, he said, as he’d saved the correspondences with the scammers and every Western Union receipt. He sent the order numbers to the attorney general’s office and each was confirmed. He filed and was granted a $65,000 refund.

Then, before the May 31 deadline for filing refund requests, Haines found another box of Western Union receipts and contacted the attorney general’s office.

On June 4, the attorney general announced that his office had helped 344 victims claim a total $1,758,988 in refunds. And that’s just the people who asked for their money back with the assistance of his office, Schmidt said.

The Nigerian prince scam, the one Haines fell for, has been around for so long that it has become cliche, Schmidt said, “but the reason that scammers keep doing the same thing is that they’re making money at it.”

For Haines, it started with an email in his Yahoo inbox in 2005.

The scammers told him that his money moved from country to country, closer and closer to being his, but at each turn he had to pay to overcome expensive obstacles.

“They started off with saying I was going to inherit $64 million, and right away I thought ‘this is kind of a joke, or it’s a scam,” Haines said.

But he was intrigued, so they started talking.

“Those Nigerians know how to talk,” he said.

The scammer worked Haines over several days. He told him that there were complicated laws governing the international transfer of large sums of money, that there were documents that had to be approved before he could have his fortune and finally that he needed thousands of dollars to move Haines’ money out of Nigeria.

That was the first payment, and over the years they told him his money moved from Nigeria to Egypt to England back to Nigeria and even to New York.

He was skeptical at times — he tried to back out while his money was purportedly in Egypt, and they talked him back in — but he’d invested so much time, money and hope that as the days passed, it became more and more difficult to accept it had all been a lie.

“It got to the point where they were showing me that the President of Nigeria had sent me a letter. It had his picture on it and everything,” Haines said. “I looked it up on the computer to see what the Nigerian president looked like, and it was him.”

Once, he received an email claiming to be from Robert Mueller, who was then the FBI director. The email was addressed to Haines, code-name “B-DOG,” and it was signed with the FBI’s address and official seal.

“I wish you can remove doubt and suspicious and go ahead I assured you that you will never regret this fund release,” the email said in part.

Eventually, the scammers grew so bold that they told Haines they were sending a courier with two chests full of cash to Wichita, and he was supposed to meet him at the airport.

Haines plans to use his reclaimed money to pay back debts incurred during the scam.

“Boy, if you get any information from Nigeria … ignore it,” he warned.

Fred Haines was the victim of an elaborate financial scam a decade ago and is still paying back the debt he incurred. People who reached Haines through email and by phone claimed to be high-ranking officials in Nigerian and Egyptian banks and promised him millions. He kept all the correspondence.
By Travis Heying The Wichita Eagle.
Tweet
Pin
Share
0 Shares