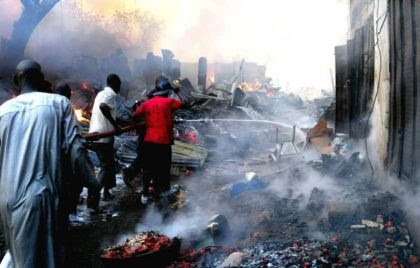 But those crying the most are the fish sellers who have lost their businesses after a fire outbreak destroyed the city’s largest fish market on Sunday.

The News Agency of Nigeria reports that the inferno destroyed dozens of shops, fish stock and other property in the popular Baga area.

Malam Muhammad Labo, a trader in the Market, told NAN that the fire started at about 10.30 pm; suggesting that it was caused by an electrical fault.

“We locked our shops and went home; later, we received the shocking news that the market was on fire.

“Most of the shops at the main fish market were burnt to ashes; we are still trying to put out the fire.”

Labo, however, said that the quick intervention of the fire service personnel helped contain the fire from spreading.

Pindar said that the service responded promptly to fire calls at the market and appealed for calm, adding that the fire was under control.

He further said that the service would investigate the cause of the fire.