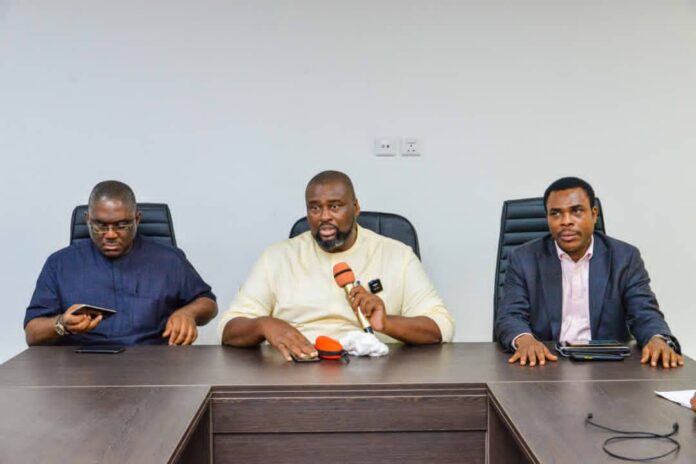 The Edo State Government on Wednesday reacted to the sweeping statement by Governor Nyelsom Wike of Rivers State that the Federal Government had refunded the shortfall of the 13 per cent derivation funds to all the states of the Niger Delta, saying it only got a total sum of N2.1 billion paid in three instalments of N700 million per quarter.

Addressing a press conference on Wednesday, the trio of Chris Osa Nehikhare (Commissioner for Communications and Orientation), Joseph Eboigbe (Commissioner for Budgets and Planning) and Crusoe Osagie (Special Adviser, Media Projects) noted that Governor Wike, who last week, thanked President Muhammadu Buhari for releasing what he tagged the arrears of the derivation funds to the states in the Niger Delta states, was only paying politics of the present circumstance of electioneering for the 2023 general elections.

Firing the first salvo, Nehikhare said that it was embarrassing that the immediate past National Chairman of the All Progressive Congress (APC) and former governor of the state, Comrade Adams Oshiomhole, would be the one to accuse Governor Godwin Obaseki’s administration of financial infidelity, given the huge debt profile, Oshiomhole left in the state after his eight-year tour of duty as a governor.

“Edo State Government will not like to go into an argument with Adams Oshiomhole on the issue of financial matters. Here is a man who met a debt of N40 billion in 2008 and as Governor received over N1 trillion as allocations and cash receipts in eight years but left a debt of N160 billion when he completed his eight-year terms. We will only like to state that Oshiomhole lacks the moral authority to talk about transparency and financial honesty. We will respond to him at the appropriate time since we heard he is also contesting”, Nehikhare said.

Explaining the controversial 13 per cent derivation fund shortfall the Commissioner for Budget and Planning, Eboigbe said it was the Federal Account Allocation Committee (FAAC) that first noticed that the Federal Government was shortchanging the states and raised the alarm.

For Edo State, the Federal Government agreed to pay the sum of N700 million per quarter and so far, it has only paid for only three quarters amounting to N2.1 billion. The records are there for anybody to check. The Federal Government is also aware that it has paid for just three-quarters of the five-year payment plan and it paid N700 million for each of the three quarters”, Eboigbe explained.

On why the state government had to wait for Wike to make the payment public before they disclosed the payment, Nehikhare explained that the payment of N700 million on a quarterly basis was too infinitesimal for the government to begin to call for a press briefing to announce that, saying that the Internally Generated Revenue (IGR) of the state was about N3 billion monthly and that added to the regular allocations made the derivation funds shortfalls payment to pale into insignificance.

He added that the N700 million quarterly payments and other funds were “judiciously used by the state government to build the system and not fancy projects and it is on record that the Obaseki-led administration is the most frugal state government in Nigeria.
“Governor Obaseki received an award for his transparency in the utilization of resources. The World Bank studied all the states in Nigeria in the last four years and found the governor worthy of honour for his fiscal transparency, accountability and sustainability programmes. It was only Edo State that also got an award from the World Bank on expenditure efficiency.”