HE WAS A BRUTE THEN… HE IS A BRUTE NOW!

Adams Oshiomhole, the butterfly who thinks himself an eagle!

February 20, 2010… then Governor Adams Oshiomhole of Edo State, took a trip to Calabar, Cross Rivers State. Before he left, he had “mobilized” APC members of the state house of assembly to strike and effect a change in the leadership. Adams Oshiomhole took that trip for the sake of plausible deniability. APC had 12 members, so did PDP! APC membership grew to 12 through decamping of a couple of PDP members. The speaker before the “purchased decamping” was PDP. PDP had majority in the house and it was able to produce the speaker at the time the house was inaugurated. The constitutional requirement is clear, you need 2/3 majority to impeach the speaker or the deputy speaker! 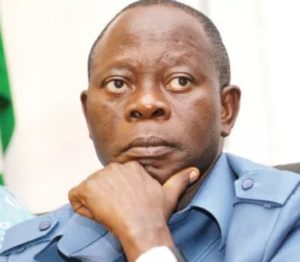 Adams Oshiomhole who wanted a puppet speaker began to scheme. He calculated that the tenure of the assembly was coming to a close. He knew for a fact that his machinations were illegal but with the Edo state police command and judiciary in his pocket, he knew he could buy time. He knew that as long as he can install his chosen one there, the house will continue to sit and with the support of the state judiciary, he can delay the eventual upturn of his illegal parliamentary coup.

On February 20, 2010, they struck! They filled the public gallery inside the assembly chambers with known and recognized thugs on the payroll of Mr Adams Oshiomhole. They took over the kings square area, where the Anthony Enahoro House of Assembly complex is situated, with the police providing cover and protection. They attempted to take control of the house. They failed. Many were injured and bruised. It was a bloody coup attempt. Adams Oshiomhole, realizing that his coup had failed, directed the police to arrest the PDP members. When that failed, he directed his Chief Justice of the state to issue a bench warrant to arrest the Speaker and other PDP principal officers and members for fighting in the chambers. The PDP speaker challenged the issued bench warrant in court and on appeal it was crushed. Justice Idahosa was reprimanded for his judicial naivety.

Adams Oshiomhole wanted them out of circulation at all cost so that his defeated rebel group can take over the house. He approached his court to issue a “kangaroo” injunction stopping the Speaker from presiding over the house. Evidence abounds that the injunction papers were prepared by a serving judge with the assistance of a lawyer. The injunction was granted. The speaker, a lawyer, couldn’t disobey a validly obtained court order no matter how crooked the process was in obtaining it. The injunction was challenged in court but Adams Oshiomhole and his APC house members abandoned the case as they had achieved the purpose for which it was instituted. With the speaker restrained, with a huge financial inducement, Adams Oshiomhole got one more member to decamp from PDP. APC members became 13 and PDP reduced to 11. With total disregard to 2/3 constitutional requirement for impeachment, Adams Oshiomhole declared a fait accompli and installed his Speaker.  Adams Oshiomhole used the police to lock down the illegal house of assembly for the remainder of their tenure even though the rightful leadership and other members never attended plenary. The case to determine if the speaker of Edo State House of Assembly was legally removed is still in court 8 years after.

Adams in his illegal and fake  “triumphalism” boasted then that the courts can not help you!

He is also boasting now… He has said repeatedly, that the courts cannot help Saraki. He is shouting that Saraki must be impeached. He has used the police to stop Saraki from getting to the National Assembly, EFCC to intimidate Ike Ekweremadu  and convert Akpabio. He has attempted to use DSS but failed!

As governor, he funded his coup in EDHA, who is funding Adams Oshiomhole’s Obsession with “SARAKI MUST BE IMPEACHED”?

This is the modus operandi of Adams Oshiomhole… In his mind, since it worked in Edo State, he is deploying same template at the national level. He will spend state resources, use security apparatus and influence judicial processes. His type is what is wrong with Nigeria.

This piece was contributed by Chris Osa Nehikhare from Benin City .