Home News Defend yourself or come back home – Ohanaeze youths 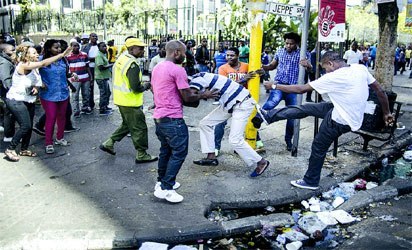 Oweing to the deaths of many Nigerians and other foreigners in South Africa, Ohanaeze Ndigbo Youth Council Worldwide, Wednesday advised Nigerians in Diaspora to defend themselves or come back home.

Disclosing this in a statement he sent to Vanguard, Mazi okechukwu isiguzoro, President General of the group condemned the xenophobic attacks on Nigerians and frowned at the silence of the South African High commission.

“85% of the victims are Igbo youths”, the group stated, calling for the suspension of diplomatic ties with South Africa government. Recall that South Africans had last week killed three persons and burnt business shops owned by Nigerians. In view of that President Muhammadu Buhari yesterday sent a special envoy to the South African President to remind him of his international responsibility of safeguarding the lives and properties of foreigners in his country.

Nigerians especially the Ohanaeze Ndigbo Youth Council Worldwid have after fresh attack, condemned South Africans inhumane treatment and called on the government to stop the killings of Nigerians in South Africa.

Read the statement below: “Tensions are rising in the land especially in the old Eastern Region of Nigeria. Youths are unpredictable now after watching the Shoprite lekki being vandalized in reprisal response to the Xenophobic attacks on Nigerians in South Africa, we can no longer control Igbo Youths as many of them have been affected directly by the untold ordeals that affected their breadwinners in South Africa.

“We call for immediate suspension of South African Business outfits and their activities in Nigeria, as we may not guarantee their safety in the Old Eastern Region of Nigeria. “Shoprite, IBTC, MTN, and DSTV should remain closed until xenophobic attacks are stopped in South Africa. We youths argue that their brothers businesses will not be under threat while South African business outfits flourish in Nigeria. “We wish to remind South Africa President Cyril Ramaphosa and South Africans that the life of South African legend Nelson Mandela was saved by a Nigerian Statesman from Igbo origin, and former Minister for Aviation, Pa Mbazulike Amaechi in the 80s before he returned to South Africa during the Apartheid era.

“How will South Africans repay us with xenophobic attacks, and why will the South African Security Agents continue to kill our Young Youths. “We have continued to lose prominent sons and daughters to South Africa Police from the grievous letter/report forwarded to us by Ohanaeze Ndigbo Youth Council South Africa, Enough is Enough. “Children of the Rising sun defend Yourself in South Africa.”