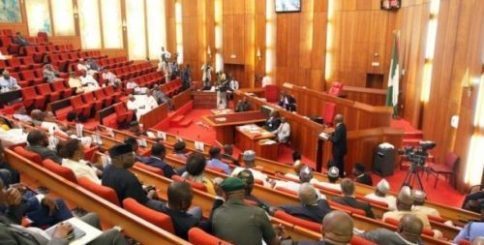 A Faction of the All Progressives Congress, APC and the Peoples Democratic Party, PDP have finally settled for a former Governor of Gombe state, Danjuma Goje and Senator Dino Melaye for Senate President and Deputy president respectively.

Daily Mail learnt late on Friday that the group called Independent Group has settled for Danjuma Goje, a former Minister and Executive Governor from Gombe State under the Peoples Democratic Party, PDP.

As soon as the news of his emergence was revealed to the PDP, the Independent Group was communicated that tough talking Senator Dino Melaye would be the PDP’s preferred candidate for Deputy.

The reason adduced by the PDP, Daily Mail learnt are Dino’s never-die attitude, his ruggedness which has tamed APC’s excesses and his in-depth knowledge of parliamentary politics.

The PDP believed it will also increase the party’s chances in the Kogi election holding later this year potentially giving the people easy choice to make especially if Dino also emerges the party’s candidate.

In any case, a source who spoke with Daily Mail Saturday Morning said, the duo would create similar scenario that brought current Senate President and Deputy, Senators Bukola Saraki and Ike Ekweremadu respectively.

“By talking tough and thinking they can yet impose new leadership on the Senate, the APC has played into the hands of some elements in the Red Chambers,” the source in PDP and Senator-elect said.

“This happened in 2015, it’s happening again. We have the numbers and its not about zoning formula any longer but integrity and ability to match APC toe to toe, power for power and sense for sense. Ordinarily, we would prefer the South East or South South to have the Deputy position but reality beckons.

“So as you have heard, Goje and Dino are two people who would maintain the status quo.”While craving for parliamentary independence, he said that does not foreclose closed working relationship with the Executive but warned that, “If they think they can make the Senate or the parliament a rubber stamp, they are mistaking.

“The next Senate would be tough on them – We know the personality that have emerged and those who would definitely head the Senate, they won’t be threatened by anything, after all nothing is new again.”

Daily Mail made several attempts to speak with Ahmed Lawan, current Senate Majority Leader and the anointed candidate of the APC, he didn’t pick his call as it rang out.

Meanwhile, the leadership situation in the House of Representatives has not been settled. Daily Mail learnt current Speak RT Honourable Yakubu is still in the running and would profit immensely from the agreement so far reached in the Senate.

A source in the Dogara’s camp said if the agreement in the Senate is cemented, which is what they have been waiting for.

It will be easy to play their card and actualize their aim.

One of the conditions for the Independent Group would be to align their interest with the PDP in the House to produce the Speaker while APC takes the Deputy. This position it was learnt was communicated to the group by the PDP and appears to have been taken hence the choosing of Goje.

Attempts to speak with Goje failed as he neither replied text messages sent to his phone or answered his phone as it rang out.

According to him, “Its still early days, it’s still being worked out. So for now we are cool. It’s good they feel we are out of the running but a shocker would come and it’s imminent,” he said preferring not to be mentioned.

Another Senator under the platform of APC, Ali Ndume, who was alleged to have joined the Independent Group that has endorsed Goje thereby jettisoning his ambition of becoming the Senate President did not respond to his text messages when Daily Mail sought his view on the matter.

The possibility of this happening is as immediate as it is realistic with Senator Saraki holding the aces. He enjoys huge support from some returning APC senators and some new senators from the party have listened to his advice that it’s dangerous to go the way of selective principle being undertaken by APC leadership.

That aside, they have been promised juicy committee membership thus winning the race with the impression that APC leadership’s promise would never be kept, a situation not a few senators agree.

If all go as planned, then the Legislature would still experience difficult relationship with the Executive.
Tweet
Pin
Share
0 Shares