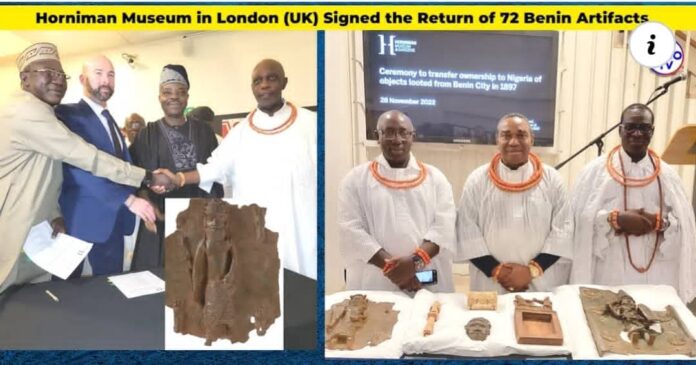 The Executive Governor of Edo state, Mr Godwin Nogheghase Obaseki, has said that his goal is to ensure that all artefacts that are physically returned to Benin are properly looked after, and as a means to create opportunities, as well as an inspiration for the people of Edo state and Nigeria.

The Governor made this remark during the signing ceremony of the return of 72 Bronze artefacts by Horniman museum in South East London, United Kingdom.

The Governor who thanked the Horniman museum and Gardens Board of Trustees for their forward thinking decision to return Benin Bronzes that were taken in 1897 from the Benin Kingdom, in present day Nigeria, maintained that this gesture would inspire other museum around the world to do the same.

According to him, the goal is to at least have the ownership of the object back to Nigeria, adding that even if some of the objects remain, it will at least serve as ambassadors for the Nigerian and Benin culture.

Governor Obaseki explained that “we have provided support to the federal government museum in Benin to refurbish its facilities and also providing support for the Edo museum of West African Art as well as The Edo Royal Museum.

He, however noted that the financial resources of the state is limited, hence only limited financial support, would be provided.

He expressed the hope that properly organized charitable Trust and Foundations, with right local and international partners would be able to attract fundings for the infrastructure and Institutions.

The return of the objects should be able to answer to some key questions and challenges, therefore, we will require significant investment in cultural infrastructure, careful thought and diligent preparations.

According to the Governor, “as a state we believe that working in a constructive way with both the federal Government and the Royal palace, we can achieve the best outcome for the opportunities and challenges that the Benin Bronzes present”.

He went further to assert that “ it is incredibly important that all Nigerians come together to ensure that what is a golden opportunity to re-ignite interest in arts, culture and tourism is not missed”.

He thanked the Oba of Benin, HRM Oba Ewuare ll, the minister of information and culture, Alhaji Lai Mohammed and the Director General of the National Commission of Museum and Monuments for their “williness to continue to work together towards what is our common goal”

Also speaking at the signing ceremony Prof Abba Tijani, Head of Nigeria’s National Commission for Museum and Monument, said that hanging to Looted objects was no longer tenable.

On his part, Nick Merriman, Director of the Horniman museum told journalist that after a lot of research and consultations there was no doubt that the object have been Looted, hence a moral argument for their return.

Prince Aghatise Erediauwa a representative of the Benin monarch, said that the 1897 attack was still a point of pain to us in Benin, adding that our Children grow up and are taught the history of what happened.

The signing ceremony of the return of 72 artifacts from Horniman Museum was held in South-East London on Monday, November 28th, 2022. Among the attendees were: Professor Alhaji Tijani, the Director General of NCMM, Chairman of Horniman Museum UK, three representatives from the Oba of Benin, Chief (Dr.) Billy Osawaru (The Obazehuwa of Benin Kingdom), Chief Charles Edosomwan (The Obasuyi of Benin Kingdom), Prince Aghatise Erediauwa and others.