Home Entertainment 8-Year-Old Boy Trains for Over 4 Hours a Day to Imitate Bruce... 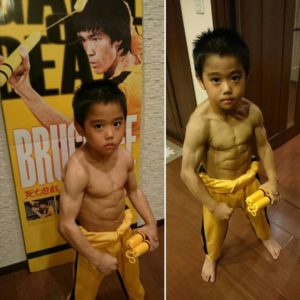 Ryusei “Ryuji” Imai, an 8-year-old boy from Nara, Japan, has dedicated his life to imitating martial arts legend Bruce Lee. Despite his young age, he trains for four and a half hours every day, and has already developed a similar physique to that of his idol.

The world was first introduced to Ryuji three years ago, when a video showing him perfectly imitating Bruce Lee’s nunchaku routine from the 1972 movie Game of Death, went viral on social media. He was mentioned by some of the world’s biggest media outlets, gained hundreds of thousands of online followers and even made an appearance on children’s talent TV show Superkids. But he didn’t let the fame go to his head, instead focusing on toning up his physique and imitating even more of Bruce Lee’s famous martial arts scenes.

Today, Ryusei Imai, or “Little Bruce Lee”, as he’s come to be known, may just be the world’s most ripped 8-year-old. And considering how much he trains every day, it’s really no surprise. Ryusei’s father says that he get up at 6 am and trains for an hour and half every morning, before going to school. When he returns, he runs for another hour, and then spends another 2 hours working on his kicks and nunchaku routines. That’s 4.5 hours of training every day.

According to Ryuji’s dad, he has been watching Bruce Lee movie since he was one, and started imitating scened from his movies at age four. In one year’s time he had already mastered the nunchaku scene from Game of Death, and was appearing on international TV shows.

Ryusei Imai currently has over 290,000 followers on Facebook, and around 33,000 on Instagram. He also has his own YouTube channel, where his dad regularly posts videos of him working out and imitating his idol.

While Ryusei’s progress – both in terms of his physique and his technique – is definitely impressive, some people consider it to be too much for his age. If he spends so much time training, when does he have time to be a regular kid and play with other children his age.

The boy’s father claims that this is what Ryusei wants, that he is the one who wants to train hard to be like his idol, but some of the people commenting on his social media posts say that his father may be stealing his childhood for something he failed to do when he was younger.

Threats to Atiku : Buhari, APC Jittery Over Collapsing Defense at...