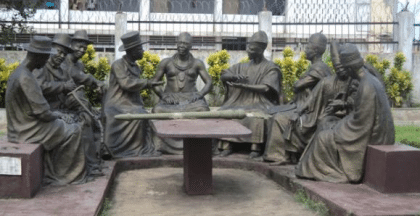 It was a quiet but serene afternoon as the spirit of Chief Toni Hanenih appeared in the inner court of the prophet’s residence in the GRA section of Benin last Monday.

“Why did you summon me from the land of the dead,” Hanenih quietly asked the prophet, a former medical practitioner who ventured into the ministry and has profited from it through enchantment.

“Chief, I am not the one interested in seeing you. I was asked to summon you by a man who introduced himself as your friend. May I invite him,” the prophet asked?

Before Hanenih could give a yes or no, in sauntered Comrade Adamson Oshobaba.

On sighting him, Hanenih immediately reacted with a frown. “What is the meaning of this? Prophet, why did you disturb me to meet this man? Will I not have rest,” Hanenih asked with a gentle rebuke of the prophet.

As he made to turn back to the land of the dead, Oshobaba spoke for the first time in a tone that forced Chief Hanenih to make a turnaround.

“Chief, I am sorry,” Oshobaba said in a tone of determined desperation to retain the attention of the famed political leader. Hanenih, who in his lifetime was known to forgive several betrayals, was gripped. This coming from Oshobaba was shocking to the dead man.

“Sorry, is a term I never heard from you gentleman, even when you hurt me. At my funeral, I even expected that you would say sorry even privately to my family, but you didn’t,” Hanenih said.

“For you to say, sorry now means that there must be fire on the mountain. So, what is it that must have brought you to call me from the dead,” Hanenih quizzed?

“That is okay, my comrade,” Hanenih said. “So, what is the problem, and why do you want to see me?”

“My leader, I am sorry to ask you, how do you deal with political rebellion? How do you manage a situation where somebody you gave political power turns to ridicule you,” Oshobaba asked?

“My friend, are you trying to remind me what you did to me, or are you mocking me,” Hanenih retorted.

“I have left the space for you. Ogbemudeien died disappointed with your treatment. Even Plucky and his father who armed you to become governor have also been rubbished by you. Or are you trying to remind me of your boast that you destroyed the godfathers?”

“My leader, I am not mocking you o! I am facing double of whatever I did to you o!”

“Leader, I asked for you because I know you dealt with this kind of rebellion severally and I remember it was through the rebellion of your former political son, Senator Odunbor that I came close to you.”

“Don’t remind me of that experience again,” Hanenih said as a smile swept through his face.

“Yes, I remember that at the height of his (Odunbor’s) rebellion as governor, that you were practically crawling around me. I remember how you almost turned into a steward during my child’s wedding in 2008, before you got your judgment.”

“Odunbor forgot that we fixed him in office, and all we needed to do was to produce a little evidence and make you governor. He thought that being a professor of law would save him.”

“By the way, how is my son, Urbih?” Hanenih asked Oshobaba of the chairman of the opposition political party in their native state.

“That troublesome man! If there was anything I enjoyed leaving office as governor, it was avoiding that rascal’s statements. I remember how he almost made me a demon with the issue of that widow.

“Leader, that your troublesome son is uncompromising and how he gets documents from the governor’s office or hears the things we whispered in Government House still shocks me.”

“But, he is about to leave office now, and I don’t see his party producing a vibrant chairman like him to trouble whosever is governor,” Oshobaba said.

“But that is not my problem, leader. My problem is, how do I deal with the trouble at hand? The man I broke the bank to make governor has turned against me; he wants to liquidate me,” Oshobaba said.

“It is what you sowed. Number one, you brought him, number two, it is how you treated those who brought you,” Hanenih said curtly in the manner he was known to speak while on earth.

“Leader, but I never physically attacked you, though I know my tongue did go wild. Can you imagine that last weekend his (Opasenki’s) thugs wanted to harass me at my house in Benin?”

“My son, I believe this your Opaseki was walking your mantra that all godfathers in Edo had been thrown out. So when he saw you as a godfather, it didn’t fit in with what you had programmed into him.”

“So, leader, what do I do to avoid disaster?”

“I will go back to the land of the dead; let me consult with Ogbemudien. We will confer and get back to you whether you deserve advice because from what I see, disaster is at the door.”